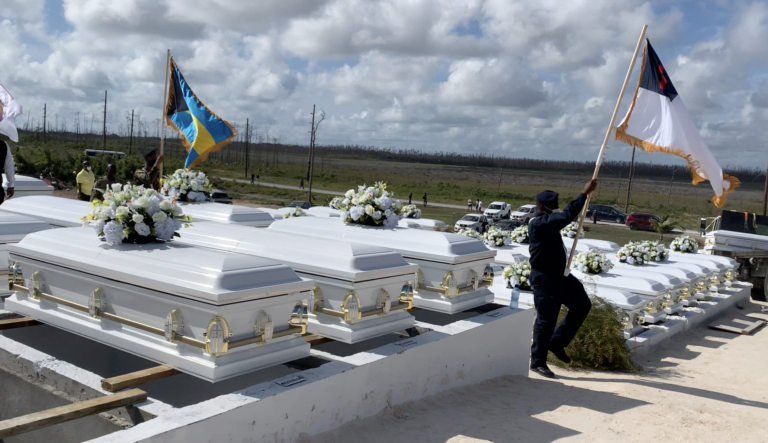 The remains of 55 Hurricane Dorian victims were buried in the Central Pines Public Cemetery in May 2020.

Coroner thanks those involved in rescue attempts, saying “much more lives would have been lost” without their efforts

NASSAU, BAHAMAS — Nearly two years after Hurricane Dorian decimated Abaco and parts of Grand Bahama, a coroner’s inquest officially declared dead 22 people who were reported missing by family members in the storm’s wake and ordered death certificates be produced for them.

For over a month, Coroner Jeanine Weech-Gomez heard testimonies from relatives of those individuals, recounting the last time they saw or spoke to their loved ones, and experts who participated in the rescue and recovery efforts, either in person or virtually via Zoom, Skype or Whatsapp.

She further ruled that based on the circumstances, there can be no doubt that Kathleen Smith, Modina Hepburn, Jendayai and Myeisha Edgecombe, Alphonso Laguerre, Michael Dawkins Sr, Malik Moultrie, Juanita and Leroy Lowe, Samuel Orelion, Ezra Davis, Astrid Emily Stratton, Constance Schneider, Emili Raphel, Nildies Vincent and Rose Marie Lubin are in fact deceased and will all be considered missing and presumed dead.

Weech-Gomez explained that she is unable and does not have the jurisdiction to give a death certificate for these individuals, but relatives of the deceased can take the Record of Inquest to the Registrar General’s Department and seek to have death certificates issued.

Under the current law, there is a seven-year wait period before anyone can be declared dead in absentia.

The coroner did not specify when the inquest is expected to continue with additional testimonies from the relatives of other people reported missing.

However, she thanked and commended all those who were involved in any rescue or attempt, indicating that more people may have died if not for their bravery.

“Among the sorrow loss and suffering, there were acts of courage, compassion and dedication,” Weech-Gomez said.

“There were instances of police and defense force officers, family members of those at risk and members of the public assisting in rescue efforts that were clearly extremely treacherous and dangerous.

“However, without these acts of bravery and commitment, it is clear much more lives would have been lost. I sincerely thank and commend all those that were involved in any rescue or attempt.”

Weech-Gomez said after hearing the evidence given throughout the inquest, several recommendations are necessary for future hurricane mitigation.

Among those recommendations are mobilizing a missing persons call center; securing amphibious crafts to better assist persons during a storm; ensuring access to professional help for victims, staff and volunteers to help reduce the adverse impact on their mental health; and establishing a mass fatality team, a national forensic morgue separate from Princess Margaret Hospital (PMH) and a mobile mortuary unit that can be transported by sea to any island or cay where mass fatality events may occur

“Current climate and meteorological literature points towards an increased risk of weather-related disasters in the future, therefore it is important we continue to take steps to be better prepared,” Weech-Gomez said.

“It is my opinion that, in such situations, our goal must be to show respect for the dead as well as compassion for the living.”