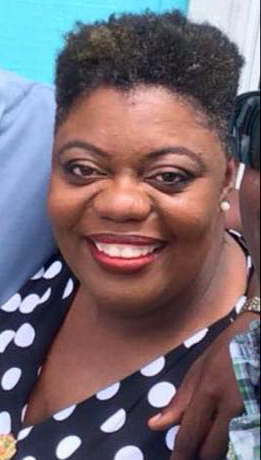 Kathleen Smith-Farquharson, 48, who is missing and believed to have drowned during Hurricane Dorian in September 2019.

“I wanted to bring her back to a safer place”

NASSAU, BAHAMAS — The son of a 48-year-old woman believed to have drowned during the deadly Hurricane Dorian said yesterday the last time he saw his mother alive was when the balcony of the two-story apartment they lived in collapsed into more than 10 feet of storm surge.

Kahlel Smith, the son of Kathleen Smith-Farquharson, testified before Coroner Jeanine Weech-Gomez yesterday in an inquest into 34 people reported to police as having gone missing during the September 2019 storm.

He said he filed a report on September 30, 2019 and gave a DNA swab to police, but has yet to receive any information of a match to a body found.

Via a Zoom call from Grand Bahama, Smith recounted his last hours with his mother as they battled the monstrous Category 5 hurricane.

Smith and his mother lived on the top floor of a two-story apartment building on the waterside, nearly a block away from the Abaco port.

Smith said when the storm hit on September 1, he and his mother were at their Marsh Harbour home. But when the storm began to pick up, their ceiling collapsed and the surge kept rising.

With the water having risen to the top floor and with the ceiling caved in, there was nowhere else for them to hide inside safely, so they decided to go out to the balcony.

The sky was gray, there were trees and debris flying around and they could barely see anything, Smith said.

Then, Smith recalled, “the balcony collapsed and that was the last time I saw her”.

He said when the balcony, along with he and his mother, fell into the water — which he estimated was as high as 10 feet — he was able to swim off from the building and come back up to the surface.

He said he swam back to the area of the building to search for his mother.

As he searched, he ended up spotting a boat floating nearby, stuck between the trees and debris, and swam to it.

Smith said he met one other person on the boat and the pair slept on the vessel until the storm was over.

When the water settled and went down to normal, he wandered over to the Golf Plaza, where there were several other people who had lost their homes — some from the Mudd shantytown who also had to run for safety during the storm.

He said he stayed at the plaza that day so he could stay close to look for his mother.

Smith said he was on Abaco for four days after the storm and every day, he would circle the area or walk to where they lived to see if he could find anything that she was wearing.

He said: “I never saw her body. If I had, I would have done something to secure her. I wanted to bring her back to a safer place.”

The family’s home was completely gutted when he returned, Smith said.

The bottom level of the complex was still standing but the top level was gone and the floor that separated the two was caved in.

He recalled a conversation he had with his mother as the storm approached, insisting that they go somewhere else.

He said, however, Smith-Farquharson insisted they would be safe at home.

“It was a life-changing experience,” Smith said.

“…It opened my eyes to a lot of things. I don’t understand how I’m still here today.”

He said he is trying to move forward from the experience, adding: “I can’t keep living in the past.”

Smith told the court he believes his mother drowned when she fell from the balcony.

“I had to accept it. I searched everywhere and didn’t find her. I feel like I wasn’t getting anywhere,” he said.

Smith’s step-father, Jason Farquharson, who was married to Smith-Farquharson for 19 years, testified on Wednesday and shared a similar conclusion.

Farquharson, who was not on Abaco when the storm hit, said Smith told him what happened and he truly believes his wife drowned.

“I know she was not a swimmer,” he said.