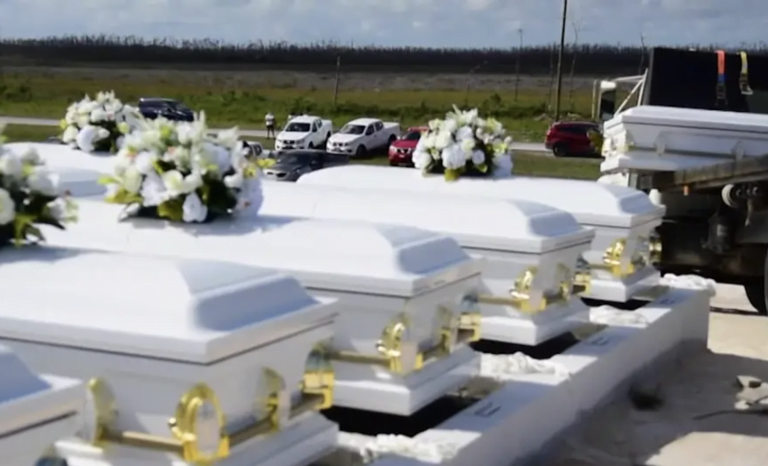 Vast majority of victims were not identifiable

NASSAU, BAHAMAS — A pathologist yesterday outlined several recommendations to the government for the handling of victims, decomposing bodies and surviving family members of national disasters, following the challenges experienced in the aftermath of Hurricane Dorian.

Dr. Kiko Bridgewater testified during the continuation of a coroner’s inquest into people presumed dead and reported to police as missing.

He outlined the response to the mass fatalities following the September 1, 2019 storm, and described the discoveries of people found dead after the storm.

Of those remains, 50 were adults, six were children, and the age of three individuals are unknown.

Bridgewater said that is because those remains were small pieces of bone fragments and a skull.

“The vast majority of victims were not identifiable by visual means because of the extent of decomposition,” he said.

The pathologist noted that attempts were made to fingerprint victims where possible, however, this was not successful because they were already frozen.

Only five of the victims were able to be identified visually and their bodies were released to their families, including Alisha Liolli, Lachino Dean, Donna M. Johnson, Ralph Kemp and Lorelda Woodside.

Eight of the bodies were identified based on the presence of identification on the body, including, Duvernat Sainjusmat; Jeffrey Danis Sr; Iscarne Carmilus; Wilner Casseus Paul; and Emmanuel Saintil.

Another nine victims were identified through DNA and three were identified from markings on their body bags and presumed to be:  Dereck Joseph; Louis Bossuet and Walter Cyntelia.

In Mary 2020, the remains of 54 Hurricane Dorian victims were buried during a remembrance service on Abaco.

Bridgewater said after learning of plans to bury unidentified victims were underway, a team examined the last set of recovered victims and took further backup samples from all victims as a precautionary measure.

He assured that the bodies were labeled with the same number to reference where each victim is buried.

Recovery efforts and the way forward

He said this was because victims were being recovered on an ongoing basis and will continue to be as more remains are discovered in the future.

He said bodies were retrieved in varying states from well preserved to skeletons and in some cases only body parts, and housed in a single 40-foot refrigerated trailer which was also used as a temporary morgue facility for examinations of remains.

He said there were challenges with moving bodies back and forth to the Marsh Harbor Healthcare Center morgue which is only designed to house six bodies.

Bridgewater said when the bodies were initially recovered, only 18 of the body bags were labeled with some type of identifying information of the places they were retrieved, including The Mudd, Bay Street, Abaco Hardware, Treasure Cay, Hummingbird Way, Central Pine and the 7th Day Adventist Church.

Among the recommendations identified by the pathology team from their experience in the aftermath of the storm, is the need for a national mass fatality plan that incorporates all stakeholders including police officers, defense force officers, funeral directors, the pathology team, counsellors and others.

Bridgewater underscored the need for training exercises to ensure first responders know how to how the recovery of bodies should be done, all vital information is appropriately recorded, proper scene photos are taken prior to body removal and correct labeling of body bags is done.

He said there is also a need to provide training to ensure remains are appropriately stored and ensure appropriate instructions are given to family members in order to ensure quick identification.

Other recommendations included the need for a national forensic morgue separate and apart from that at the Princess Margaret Hospital (PMH) for processing of all deaths coming under the jurisdiction of the coroner.

Bridgewater noted that the morgue should be fully staffed and budgeted for by the government, with its own protocols independent of the Public Hospitals Authority.

He said it should be directly under the Coroner with support from various ministries including the Ministry of Disaster Preparedness, National Security, and any other appropriate ministry.

Additionally, the pathology expert identified a need for a mobile temporary mortuary unit outfitted with examination tables and a temporary body storage refrigeration unit which can be transported by sea to any island or cay where a mass fatality event may occur.