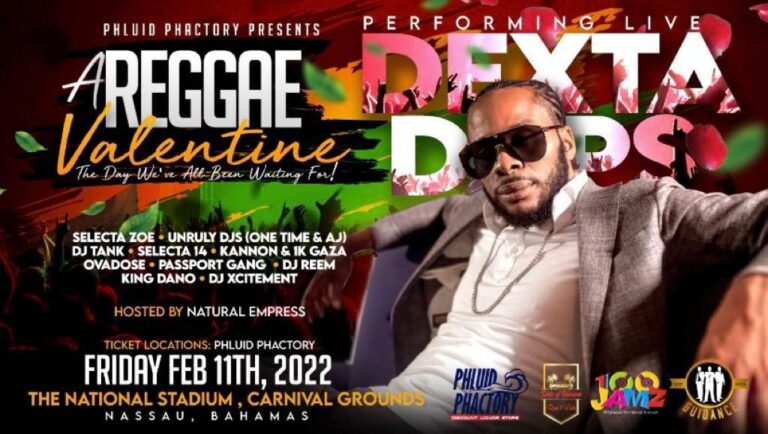 A flyer for dancehall artist Dexta Daps’ concerts in The Bahamas, dubbed “A Reggae Valentine”, in February 2022.

NASSAU, BAHAMAS — Clayvon Duncombe of Phluid Factory, one of the named promoters of the Reggae Vallentine Event featuring Dexta Daps, yesterday assured the concert was still on despite government officials confirming that the Ministry of Health had yet to approve the event.

“Please people continue to buy your tickets,” he urged.

“Phluid Factory is here. If you don’t know, now you know.

This is a weekend where persons will be socializing anyway because of the other events.

“Dexta Daps concert this weekend. Big shout out, like I said, to the Ministry of Health and Wellness.

“Big shout out to the PLP (Progressive Liberal Party) government. We know this [is] a new day.

“All of our protocols are in place. The [COVID] numbers are low.

“This is a good day and this is the best time to have an event right.

“This is a weekend where persons will be socializing anyway because of the other events.”

Yesterday, Minister of Health Dr Michael Darville said a communication was sent on January 17 to the organizers in response to their request for approval of the event, which sought to host 2,000 people on February 11.

“The email [advised] the organizers that the event could only occur if it adhered to the existing parameters in the Health Services Rules — 30 maximum outdoors and 20 maximum indoors,” Darville said in a correspondence.

The minister said the application was denied in part due to the state of the pandemic at that time, but the organizers were invited to resubmit a request for approval for reconsideration two weeks prior to the event.

He said the Advisory Committee of the Ministry of Health had not received a resubmission of a request from the organizers as of 10am Monday.

In a separate interview with Eyewitness News yesterday afternoon, Director of Communications in the Office of the Prime Minister Latrae Rahming said the organizers were expected to submit another application.

Asked whether the concert would be limited to 30 people outdoors if approved, Rahming said the ministry has a process and the COVID rules remain in place.

“We always remind the public to be guided by them (COVID rules) and so far, as persons who are seeking to plan future events — and it is significant resources insofar as funding,” he said.

“But we are in a global pandemic and…any event that is subject to large gathering is governed because of its [potential for] high transmissibility, and so, I think that whilst we are minded this is the fourth wave and while there are encouraging signs as to where the pandemic is going, we are minded that large gatherings pose a significant risk for future spread or possible spread.”

As it relates to the organizers’ assurance of the event going forward, Rahming said he could not speak to their confidence.

He said the event promoters and organizers are entitled to apply and due process and consideration will be given.

He added: “We would not risk our investment, risk our name on the line for things like this.”