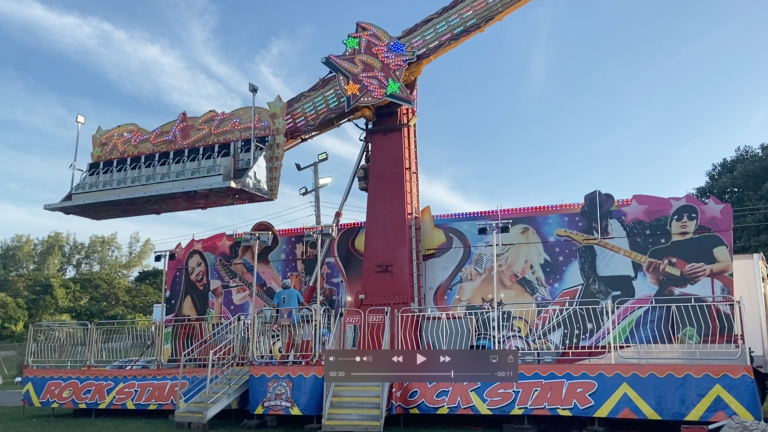 NASSAU, BAHAMAS — The annual Christmas Carnival is set to open on December 10 after receiving approval from the government, according to Joseph Alberts, manager and coordinator of Midways by McCafferty Enterprises.

Operators have already started laying out equipment and materials and testing rides.

In an exclusive interview with Eyewitness News yesterday, Alberts said: “We are getting ready for the festival like we always do, the winter carnival. We are so blessed that the prime minister gave us permission to have the event for the people of the islands this year.”

“This is our second home. We are blessed to be here to start with and we want to thank everyone for letting us be here.”

The fair will open at 6pm on Friday, Alberts said, assuring that all approvals have been received from the prime minister.

“He gave the okay and everybody else said no worries,” he added, when pressed on the issue.

The popular activity was not allowed to operate in The Bahamas last year due to the pandemic and public health risks associated with large gatherings.

Alberts explained that the fair was not able to operate in the United States either.

“We do like 10 state fairs across America but last year we did not do any fairs,” he said.

“We haven’t worked in 16 months until we started working this summer that just passed.

“All of our events that we did with COVID. We are so COVID safe around here it’s crazy. We played state fairs with half a million people each week — never had an incident.”

He further insisted that all of their workers have been fully vaccinated and the equipment is regularly sanitized with a government-produced chemical, along with constant fumigation to kill any germs or particles that are in the air.

“Also we have for safety precaution when you enter the fair this year,” he continued.

“We will have temperature checks that you walk right underneath like you do in the airport and they check your temperature, so anyone with a fever will not be allowed in this year.

“…We are taking all the precautions to make everyone feel comfortable here, just like we did in America.

“We ran giant state fairs in New Mexico, Georgia, Alabama, West Virginia this summer and we did absolutely wonderful”.

Last week, Minister of Health Dr Michael Darville advised that while the operators had all of the preliminary applications in place, the committee with purview for the carnival had yet to make its final decision as of Wednesday.

He could not be reached for comment on the matter up to press time.

Bahamians and residents alike usually look forward to the carnival rides and games for family fun, as well as the food offerings of cotton candy, candy apples, and pizza.

Alberts noted that patrons can expect some of their old favorites, along with new ride, such as the Rockstar and the Galaxy.

He explained that instead of using tickets, the event will use a new card punching system to avoid the need for rolls of tickets.

“We got a lit bit of everything for everybody and the best pizza in town,” he said.

Alberts added that operators expect an increase in attendees during the holiday due to the cancelation of the Holiday Junkanoo parade.

“I’m expecting very large crowds on that night and working very late hours, because Junkanoo lasts all night,” he said.

“As long as the people want to stay out here and everyone’s happy and having a great time we are here and we are ready to rock and roll.”

Nothing to see here! The competent authority PM Davis gave the go! A New Day indeed!