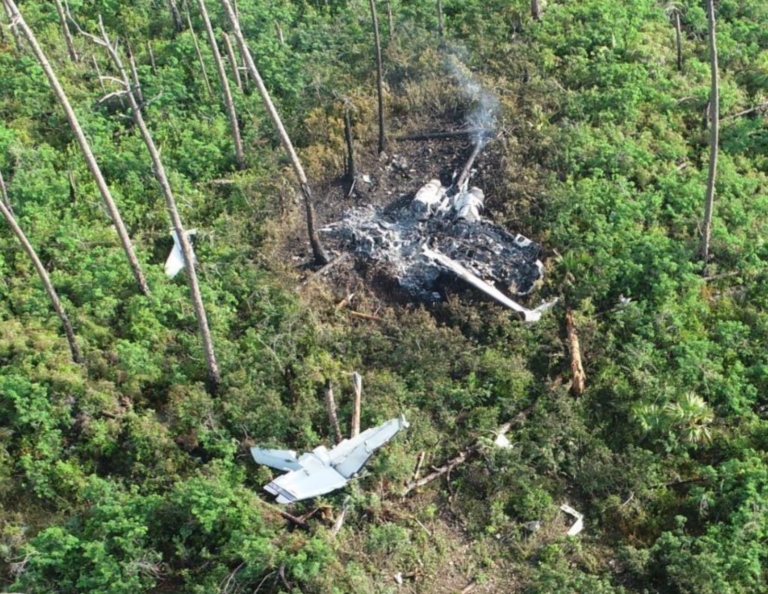 NASSAU, BAHAMAS — A final report into a fatal plane crash in Treasure Cay, Abaco, last month determined the pilots’ “unfamiliarity with the aircraft systems and their failure to configure the aircraft for the proper takeoff” contributed to the aircraft’s failure to perform.

The Westwind aircraft crashed and burst into flames on July 5, killing the two Bahamian pilots onboard.

In its final report, dated August 2, the Air Accident Investigation Authority (AAIA) said the twin-engine business jet departed Las Americas Airport in the Dominican Republic on July 2 at 2.03pm with two crew members and three passengers on board, arriving at Treasure Cay International Airport around 3.45pm.

After offloading the passengers and securing and locking the aircraft, the crew checked into their hotel.

Immigration officers apprehended the crew on July 4, the reason for which remains unclear as the pair was released on July 6.

During the post-crash interview with the pilots that flew the aircraft to Treasure Cay, it was revealed that the aircraft was stolen, the AAIA said.

According to the report, the crew said an hour before their release, they were informed of the crash but advised investigators that they never met the pilots involved and never gave anyone authority to move the aircraft.

The crew also advised that they had the only set of keys for the plane, which they produced for investigators during their period of detention.

Meanwhile, the Bahamian pilots, identified as Lavan Paul and Jason Allen, set a departure time of 2.10pm from Treasure Cay to New Providence, with an arrival time of 2.33pm, according to investigators.

Witnesses recalled the two pilots entering the ramp after 3pm, and said one of the pilots onboard advised customs officials that they were departing for Marsh Harbour for fuel for the aircraft.

The AAIA said it was uncertain which destination the aircraft was traveling to as the flight plan differed from the information the pilots advised customs.

According to the report, a witness recalled that both pilots sat in the aircraft for around 40 minutes before starting both engines and proceeding to the runway for departure.

But the aircraft plowed through airport lighting equipment at the end of the runway, hitting and breaking several trees along its path.

It then struck a small mound and spun into additional trees before “breaking apart and bursting into flame” around 2,000 feet from the end of the runway.

The report said two fire trucks from the township responded “as this airport did not have a fire truck or crash and rescue personnel stationed on-site” but that the trucks were unable to reach the crash site and assist due its location and no access road available.

“The fire continued unimpeded, dampened only by the intermittent downpour of rain, which did not aid in extinguishing the blaze, but rather, only limited the spread of the fire to surrounding bushes,” the report read.

“The raging fire totally destroyed the aircraft and much of the control surfaces and components in the direct area of the blaze.”

Investigators said this hindered efforts to “closely examine all components of the aircraft”.

The cockpit voice recorder and/or flight data recorder, which the AAIA noted would have revealed a more accurate account of what transpired, could not be located.

But the report noted: “[The] investigation has uncovered that with this type aircraft, there are several configuration settings that the pilot must physically select and set, in order that the aircraft would climb after takeoff.

“Based on the fact that the aircraft was not able to climb, those configurations and settings were probably not met.”

The Bahamian pilot was issued an Airline Transport Pilot certificate by the FAA on August 28, 2019, and held a type rating for a Boeing B737 and Saab SF340 aircraft, but did not have the requirements to operate the Westwind aircraft.

The second pilot also did not meet the requirements to operate the aircraft or act as second in command as he was not in possession of “at least a private pilot certificate or type rating required for the aircraft type”.