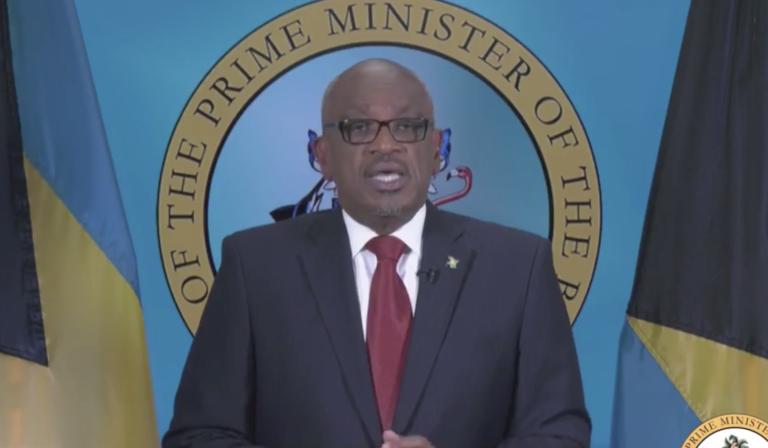 Noting that The Bahamas remains in a surge, the prime minister said the nation must continue to take an aggressive approach.

He asked residents to limit their contact with those in their immediate household and consistently wear masks while in public.

He also noted that civil servants will work at home on a schedule where possible to limit contact, and he asked the private sector to undertake the same.

Minnis said in recent weeks there have been significant increases in cases in the region, fueled by the rapid spread of the delta variant, a more contagious strain that has seen increased hospitalizations and deaths.

The delta variant has not been confirmed in The Bahamas, but the prime minister said the country must proceed with an “abundance of caution”.

Minnis said the healthcare sector is being stretched to its limit, noting that healthcare professionals, whom he called men and women of courage, continue to work hard.

According to the prime minister, another 49 medical staff and 111 nurses will be hired shortly at a cost of $7.1 million as the government plans to engage as many trained professionals as possible.

He also called on retired nurses to come forward to assist the nation.

According to the prime minister, the contact tracing unit has also been shored up with resources, including an epidemiologist and the “imminent engagement” of 40 more full-time staff.

Samaritans Purse has also offered its assistance at the government’s request, he noted.

A site inspection of Princess Margaret Hospital (PMH) was purportedly performed yesterday to assess the operation and determine how to expand bed capacity by 19.

This Friday, the organization will erect another 18 beds, the prime minister announced.

Additionally, the Public Hospitals Authority (PHA) is working with a donor who has offered an additional medical tent, Minnis said.

The prime minister said the COVID-19 pandemic has been compounded by misinformation and anti-vaccine disinformation.

“…We are in a struggle between life and death.

“Taking the vaccine will protect you from serious illness and death.”

None of the COVID-19 hospitalizations and deaths have been fully vaccinated individuals, the prime minister pointed out.

Minnis said his recommendation “as a medical doctor of 40-plus years” is for residents to take the jab, adding that not doing so “could kill you”.

Vaccinating a large percentage of the population is the way to return to country to normalcy and get the country out of the pandemic, the prime minister noted.

The country is expected to receive a tranche of donated Pfizer vaccines from the United States.

The prime minister said children from ages 12 to 17 will be eligible to become vaccinated with their parents’ consent.

Just over 103,000 vaccine doses have been administered in The Bahamas, with nearly 44,000 people fully vaccinated.

The Bahamas is expected to receive a final tranche of 33,600 vaccines from WHO’s COVAX Facility next week.

Just get the damn shot, people. Cayman is 70% vaccinated. Barbados is 60%. What do Bahamians know that NOBODY ELSE knows? Do the right thing and take the vaccine!

Absolutely Vaccine is best way to get back to Normal
land Life!