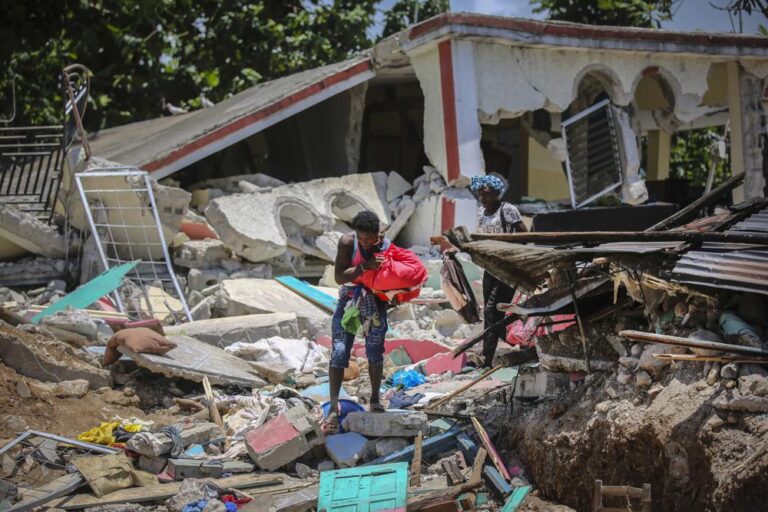 The aftermath of a 7.2 magnitude earthquake that struck Haiti on Saturday, August 14. (AP: JOSEPH ODELYN)

Tremors from earthquake felt on Inagua

NASSAU, BAHAMAS — Guy Cerubin, a resident of The Bahamas who has been stranded in Haiti for over five months due to the ongoing travel ban, was lying in bed in a two-story apartment in the southern district of Haiti when a 7.2 magnitude quake struck the island around 8.30pm on Saturday.

At the time, Cerubin was in Jacmel, not far from where the major earthquake struck.

“It was just terrifying where we felt the magnitude and shaking on the ground,” Cerubin told Eyewitness News.

“It was definitely severe. Again, the only word that can describe it is horrifying.

“I was inside of the house. We felt like the two walls, the northern and southern side of the wall…were actually shaking.”

Asked about the state of the city and rescue efforts, Cerubin said: “The country is in a state of chaos simply because where the vast majority of the people don’t want to stay inside of their house. They were still feeling the aftershock, the after waves.”

The death toll in Haiti has climbed to just shy of 1,300, according to international reports.

Another 5,700 people were injured, with thousands displaced from damaged or destroyed homes.

Rescuers were working against the clock, with Tropical Depression Grace expected to impact the island on Monday night.

The depression, though downgraded from a tropical storm, is expected to bring heavy rainfall, flooding and possible landslides to the Caribbean nation.

According to international reports, the earthquake struck the southwestern part of Haiti, triggering landslides that impeded rescue efforts in the country, which has been challenged with surging coronavirus cases and the recent assassination of the late President Jovenel Moise.

Expressing sadness at the loss of life and widespread destruction following the earthquake, the Bahamian government said it stands prepared to render whatever assistance it can its sister CARICOM nation.

“A message of condolence has been sent to the charge d’affaires of the Embassy of Haiti,” read a statement.

“The Bahamas stands ready with the Caribbean Community to render whatever assistance possible to our sister member of CARICOM.”

“Heartfelt condolences go out to those who lost loved ones, and we pray for the swift recovery of those who were injured and the prompt reappearance of those missing.”

The diplomatic staff at the Bahamian embassy in Haiti returned to The Bahamas after the assassination of the president.

The government said it contacted the local staff of the embassy in Haiti and confirmed they were also reported to be well.

“Contact has been made as well with the Bahamians who are in Haiti and they are also reported to be well,” the Ministry of Foreign Affairs said.

“The Bahamas stands in solidarity and prayer with its friend and neighbor, Haiti, in the recovery efforts during this most difficult period.”

Inagua is around 160 miles from Haiti. The island’s administrator, Marlon Leary, said he had been sitting in his living room when he felt the tremors.

He said within minutes, he began receiving calls from around the island with reports of similar experiences, including furniture and beds shaking.

“At the onset, I thought I was having a dizzy spell and it was unnerving,” Leary told Eyewitness News.

“I said ‘what is going on?’ and then I stood up straight and said ‘hold on; relax’.

“About five to six minutes after, a gentleman called me and asked me if I heard of any earthquake in the geographical area because some people were in the food store and they were experiencing some shaking and things moving around.”

According to Leary, there were no reports of injuries or damage on the island.