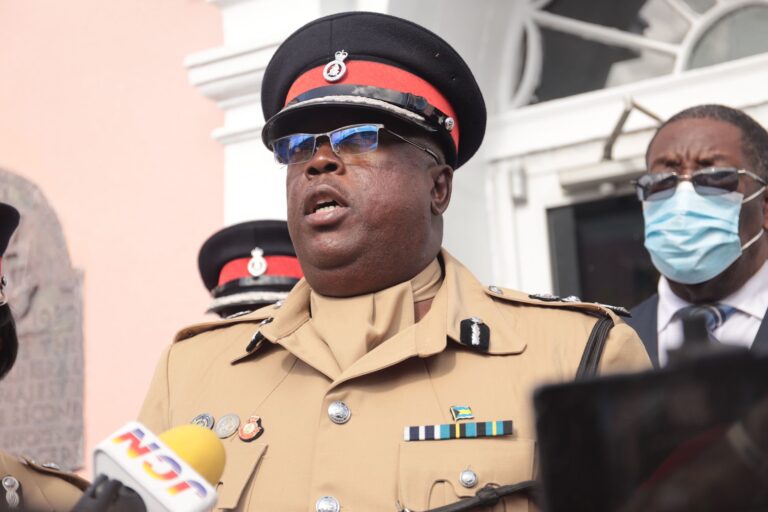 Police Commissioner Paul Rolle, serving as provost marshal, reads a proclamation from the governor general proroguing Parliament on the steps of the House of Assembly on Wednesday, August 18, 2021.

Rolle was responding to questions from the media during a press conference on whether the Royal Bahamas Police Force (RBPF) has launched an investigation into the alleged issuance of questionable contracts by Gibson.

He said the matter regarding Gibson does not come before him.

“You’re asking the wrong person. The police only investigate matters that are reported to us,” Rolle said.

“I don’t have any authority to go and dig into nobody’s business unless there’s a complaint.”

The commissioner of police further noted that the Prevention of Bribery Act outlines how those complaints are initiated.

Allegations against Gibson suggested that Elite Maintenance Incorporated Ltd — a company purportedly co-owned by his former fiancée — received a series of payments from WSC totaling over $500,000 between November 2018 and January 2021.

On August 29, Gibson fired back against what he called “false allegations”, asserting that he has “no beneficial interest” in the company at the center of the controversy and declaring the accusations against him to be false and politically motivated.

Rolle was also asked whether police have looked into allegations at any time involving former Progressive Liberal Party (PLP) Education Minister Jerome Fitzgerald and if there were any substantial findings.

He noted that while there were “a lot of talks”, there were no allegations against the former MP.

“I cannot comment on matters that were in the media regarding that,” the commissioner said.

“I’m not aware that there were any formal complaints made [against] Jerome.

“You hear a lot of information being circulated in the media and I think we need to be fair and be honest when we speak.

“A lot of people were saying stuff but nobody came forward.”

Rolle underscored that there was no formal complaint for an investigation to move forward.

Fitzgerald had several controversial scandals throughout his 2012-2017 term in public life and up until his defeat at the 2017 polls.

While several Progressive Liberal Party (PLP) MPs were hauled before the courts on allegations of corruption immediately following the 2017 election, Fitzgerald was not one of them.

He has recently been named as the senior policy advisor and head of the Prime Minister’s Delivery Unit (PMDU).