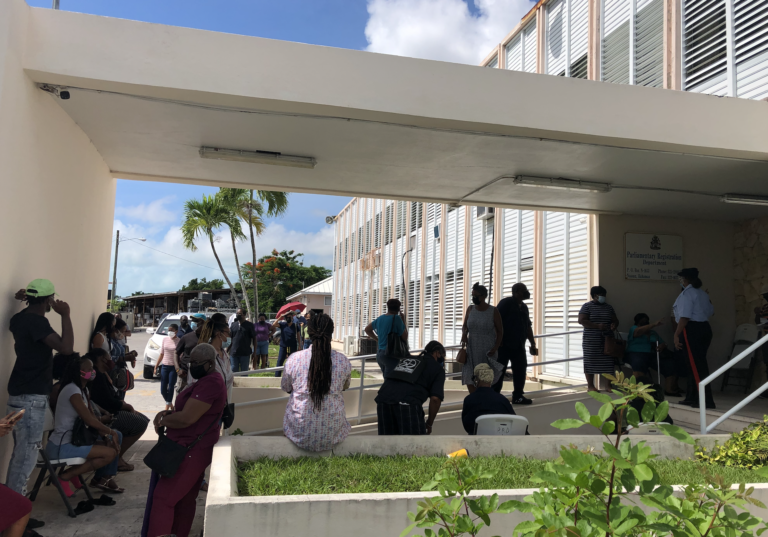 Residents line up to register to vote at the Parliamentary Registration Department (PRD) on Monday, July 19, 2021.

NASSAU, BAHAMAS — The current voters’ register stands at 193,281 voters, with just over 18,901 voters added to the register since the 2017 General Election, according to Parliamentary Commissioner Lavado Duncanson.

In an interview with Eyewitness News, Duncanson advised that as of yesterday, there were 134,474 voters registered on New Providence; 30,613 on Grand Bahama; and 28,194 on the Family Islands.

Various centers have been opened since last year for expanded voter registration exercises on New Providence and Grand Bahama, including for individuals who are not on the 2017 register or who may need to make an address transfer.

Duncanson said some 6,260 people have transferred from their previous constituencies since 2017 and some 8,325 deceased names have been purged from the register.

There was not an expectation for an influx of people registering before the election is called.

Duncanson noted that given the current numbers, the department believes registration is “trending in the right direction”.

Last week, voter registration sites across New Providence were “inundated” by a mad dash of people registering to vote after Progressive Liberal Party Leader Philip Brave Davis predicted the prime minister would seek to dissolve the House and call an election last month.

The parliamentary commissioner noted that the department will continue to make adjustments to ensure it is prepared for any possible rush of voters.

“We are seeing consisting numbers of persons presenting themselves at this time,” Duncanson said.

“It’s not as much as the spike that would have taken place, however, the numbers are indicting that persons are still coming out to register and transfer.”

He added that all COVID-19 protocols and social distancing are being implemented during the process.

There have been ongoing concerns raised over the integrity of the voters’ register, particularly as it relates to dead and missing Hurricane Dorian victims.

House Speaker Halson Moultrie, who chairs the Constituencies Commission, has also expressed concerns regarding the register, insisting he is not satisfied it is sufficiently accurate and purged of deceased and missing individuals.

The Constituencies Commission has submitted two separate reports to the governor general for review — a “one-man report” from Moultrie recommending 43 constituencies and another retaining the current 39.