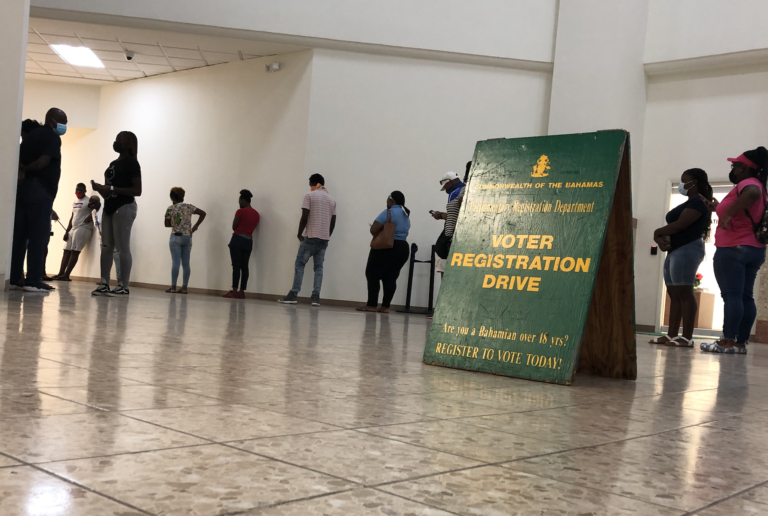 Residents line up to register to vote at the General Post Office on Monday, July 19, 2021.

Both the prime minister and leader of the opposition have called for Bahamians to register in the shortest possible time.

There were long lines of a mixture of first-time voters and those seeking to transfer locations at the Parliamentary Registration Department (PRD) on Farrington Road, the General Post Office and the Carmichael Road Post Office, among others, with some residents spending hours lined up.

First-time voter Ariyah Knowles, 19, said while she wanted to ensure she completed the registration process, she had no intention of voting in the next general election due to what she called a lack of confidence in the existing political parties.

“I heard it was the last day to do it, so I wanted to get it out of the way,” she told Eyewitness News.

Asked if she planned to vote, she said: “Honestly, probably not.

“I just feel like both parties aren’t really doing anything to really change the country, so it’s like why go out of my way to vote for a party that I am not really confident about, you know.”

Ricardo Meadows, who was registering at the General Post Office, said he wanted to make sure he did not “get leave out”.

He said: “I don’t really want them (the Minnis administration) to get out, but the way how they moving and the way how they having things [organized]…I want to see [a] better process for the people.”

Meanwhile, a mother of two first-time voters, who did not wish to be named, said she visited the Parliament Registration Department on Farrington Road due to the mounting speculation about an early election — although the prime minister has denied such claims.

“Whether it is true or not, they just need to hurry up and get this thing over and done with,” she said.

“I think the people of The Bahamas are ready, and me personally, I am ready.”

Another woman, seeking to transfer her registered address from Carmichael to Fort Charlotte, having moved to the area four years ago, said: “I came out early this morning to get it done.”

Asked about the government’s chances of reelection, she said: “I think they’re pretty good, but I can’t speak with any certainty, of course.

“So, we will see how it turns out. I am just happy to be able to have a voice in the election.”

Natasha Ferguson, 35, a second-time voter who visited the PRD to get her voter’s card reprinted, said: “I am definitely interested in voting or whatever like that, because I need this government what in, out.

“Never in the history of time has The Bahamas been like this.”

Another eligible voter said while she has not seen the kind of change she would have voted for, she still wishes to have her “voice heard by placing an ‘X’ on the ballot”.

“I think that the majority of Bahamians are leaning to change the party and the government because I think they are not confident in the current government,” she said.