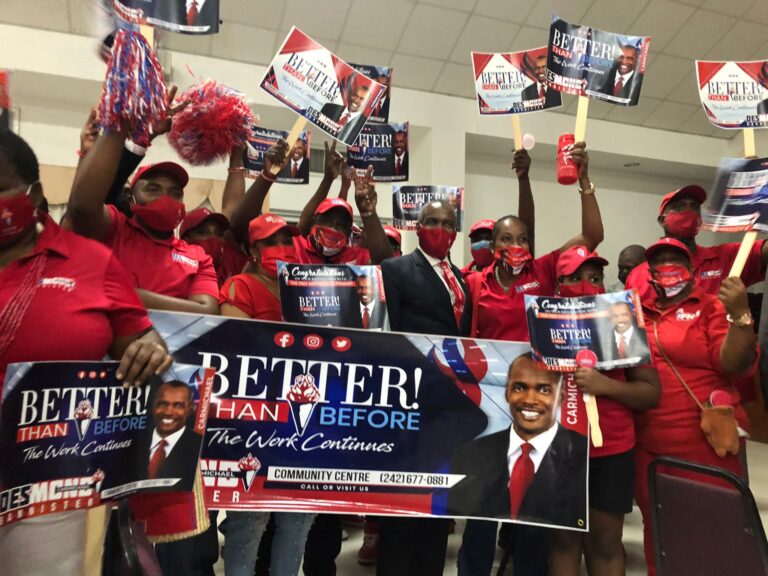 Incumbent MP Desmond Bannister is ratified for the Carmichael constituency on Thursday, July 15, 2021.

Bannister: Candidates should be going through register when they campaign

NASSAU, BAHAMAS — Amidst concerns over the integrity of the voters register, Deputy Prime Minister Desmond Bannister said yesterday that candidates vying for election should look to ensure the register is clean.

House Speaker Halson Moultrie, who chairs the Constituencies Commission, has also expressed concerns regarding the register, insisting he is not satisfied that the register is sufficiently accurate and purged of deceased individuals.

Speaking to the matter on the sidelines of a ribbon-cutting ceremony for Margaritaville Beach Resort and Fins-Up Water Park at The Pointe, Bannister said “the register is only as good as we are.”

“This is not something new… That is part of the process of campaigning, so candidates get out there and they go through the register with a fine-teeth (sic) comb and when that process is completed, candidates themselves ensure that process is clean.

“That’s a process we have had for many, many years because no government can assure that everybody who is a deceased is not on the register.

“The process itself is one where we ensure it’s a clean one.”

On Monday, voter registration sites across New Providence were “inundated” by a mad dash of people registering to vote after the PLP leader predicted the prime minister would seek to dissolve the House and call an election this week.

Davis said that while it was encouraging to see Bahamians lining up to register to vote, there has been “a flood of reports” from voters facing difficulty in transferring their registration because they have moved since the last election in May 2017.

He specifically pointed to people displaced from Hurricane Dorian and noted that given the necessary requirements for individuals to change their place of residence, “the only possible goal here by the government can be to exclude these voters from the process”.

The Parliamentary Registration Department has also been actively engaged in cleaning up the now permanent register by removing those who have died since the last general election and registered voters who have transferred from their constituencies.

However, Moultrie has said he does not believe the register has been properly “scrutinized”.

“I am not satisfied that the permanent register that we have has been properly scrutinized to the point that we can be comfortable that it is accurate and has been purged of dead persons since May 2017,” he said in a recent interview with Eyewitness News.

“And secondly, the persons who are missing out of Abaco and Grand Bahama have been flagged on the greater so that no one can come and impersonate them on Election Day and vote in their stead.”

The official death toll of Hurricane Dorian is 74 people, but the number of missing people continues to be disputed.

In May 2021, a coroner’s inquest officially declared dead 22 people who were reported missing in the storm’s wake.