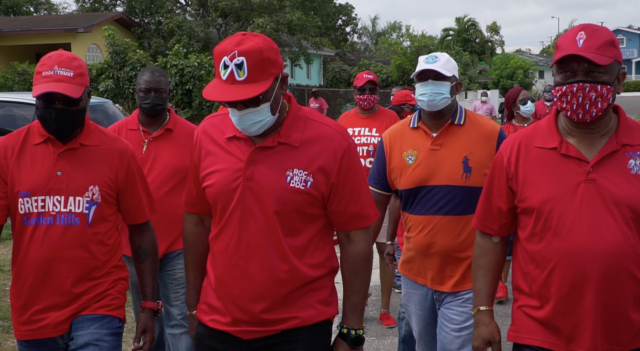 NASSAU, BAHAMAS — As political parties continue to launch their campaigns in the lead-up to the upcoming election, Minister of Health Renward Wells said yesterday that those events should be done responsibly and following all COVID-19 protocols.

Supporters and candidates of major political parties have been hitting the pavement, campaigning in various communities in large numbers despite recent criticism and concerns over its impact on rising coronavirus cases.

Wells, who spoke to reporters on the matter outside Cabinet, noted that there has been a lot of political activity recently and admitted that he held a drive-thru feeding event in his constituency on Friday, and saw other events with “people gathering” over the weekend.

The event garnered a large crowd of Progressive Liberal Party (PLP) supporters, the majority of whom were wearing masks, including PLP Leader Philip Brave Davis.

Davis told reporters the event was “not a rally” and indicated that attendees were following protocols.

Asked whether health officials are going to pay closer attention to the matter given the possibility of a third wave, Wells said yesterday: “We are asking, even if you are going to be doing campaigning, that you do it within the ambit of the health protocols.”

He said based on the current protocols for gatherings, 20 individuals are more than enough to do a door-to-door campaign, in addition to social distancing, wearing masks and hand sanitizing.

“There’s opportunity within the ambit of the protocols to be able to have your political activity, but it has to be done in a very responsible way,” he added.

Pressed on whether health officials have provided parties with guidelines on campaigning in the COVID-era, Wells noted that the ministry does not speak to particular events, but more to the protocols that “guard and protect events that take place”.

Speaker of the House of Assembly and Nassau Village MP Halson Moultrie recently called the political campaigning “reckless” and said it endangers constituents and campaign workers.

As of Monday, the number of cases in the country stood at 9,270. The number of active cases stands at 296.