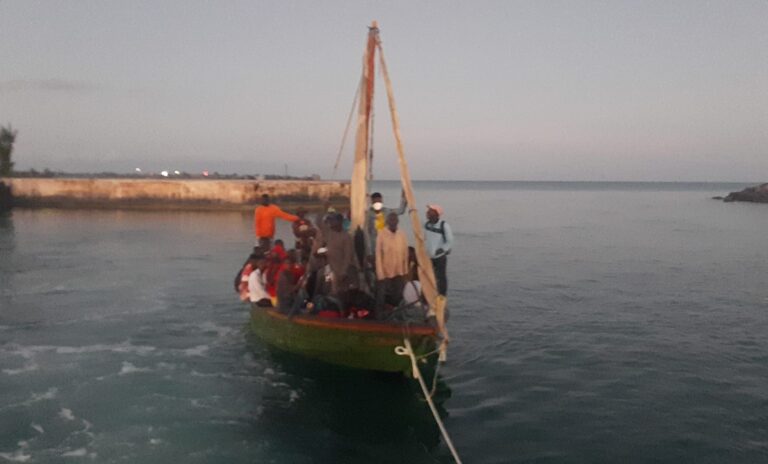 NASSAU, BAHAMAS — The “immigration crisis” in Inagua shows the need for legal reform in The Bahamas, according to Human Rights Bahamas (HRB) President Stephanie St Fleur.

The human rights activist was referring to a recent influx of undocumented migrants to the southern borders, with hundreds of them being detained on Inagua.

The matter has led to heated public discussion and some Inagua residents voicing concern about their safety and way of life.

In a statement issued yesterday, St Fleur said: “This is a very complex issue. On the one hand, every person within this jurisdiction has a right to due process and to be presumed innocent until proven otherwise by a court of law; on the other hand, the wholesale and indiscriminate criminalization of large groups of people in mass trials where there is no proper legal representation cannot accord with their fundamental rights, especially as there may be legitimate refugees and asylum seekers among them.

“The fact of the matter is that the Immigration Act is more than 60 years old. Its drafters could not have contemplated the seismic shift in immigration tends and circumstances facing The Bahamas and the world today.

“We therefore urge the new administration to take another look at the Nationality, Immigration and Asylum Bill, drafted by the Law Reform Commission, which the former government circulated for consultation but never brought before Parliament for debate.

“We believe the passage of this bill will help the administration in beginning to effectively navigate many of the difficult issues surrounding undocumented migration in a manner which better conforms with the rights and protections in the Constitution.”

The Nationality, Immigration and Asylum Bill would repeal the Bahamas Nationality Act and the Immigration Act. The draft legislation sought to outline provisions for asylum in the country, in addition to addressing the long-debated question of how citizenship is passed on, among other related issues.

At last report in August, before the September 16 general election, final revisions were still being made to the third draft of the bill.

In the meantime, St Fleur warned that the current situation in Inagua is “at risk of becoming a serious humanitarian crisis” — a sentiment also shared by Deputy Prime Minister Chester Cooper.

She also agreed with Foreign Affairs Minister Fred Mitchell in “questioning the previous government’s position that migrants should be taken before a court, tried and convicted of a crime before being deported”, firmly asserting that The Bahamas should not “criminalize” migrants, refugees or asylum seekers.

While she noted that Inagua is in “desperate need of help to manage the situation for the good of the residents, the migrants and the authorities on the ground”, the HRB president expressed confidence in the ability of the government to deal with the “crisis” in a “humane and compassionate way”.

“It is crucial that in navigating this difficult situation, the government ensures that the fundamental rights and protections enshrined in the Bahamas Constitution are upheld for each and every migrant,” St Fleur said.

Considering what some countries do for border violations, we are not punative at all. They have violated general entry regulations to the country, violated Covid pandemic requirements, etc. Is she paying for their RT-PCR tests and travel visas? This is required for every person entering the Bahamas supposedly??

Why does she not say the matter should be done in a safe way considering the residents in the island?You always hear the emotive words of humane and compassion.
She never mentions the constitutional rights of the citizens to be protected, only those of the migrants.
Human rights are for everyone and not just our selected group we advocate for!

There is more Haitian in the Bahamas then any other country. Our island is very small and we can’t afford to take care of them. They are not trying to come 10 at a time there coming 200 at a time .They all need to be send back , the laws are not strick enough , they need to be fine $2000 and 2 years in jail then they would stop coming .They can’t go to any other country in the world and behave like that .enough is enough . Plus you don’t know who is a rapist or a killer coming to live in your community. We cannot run back ground check on all of those people coming into our country . There are a lot of Haitian gangs in the Bahamas and crime is very high we don’t need this in our back yard.