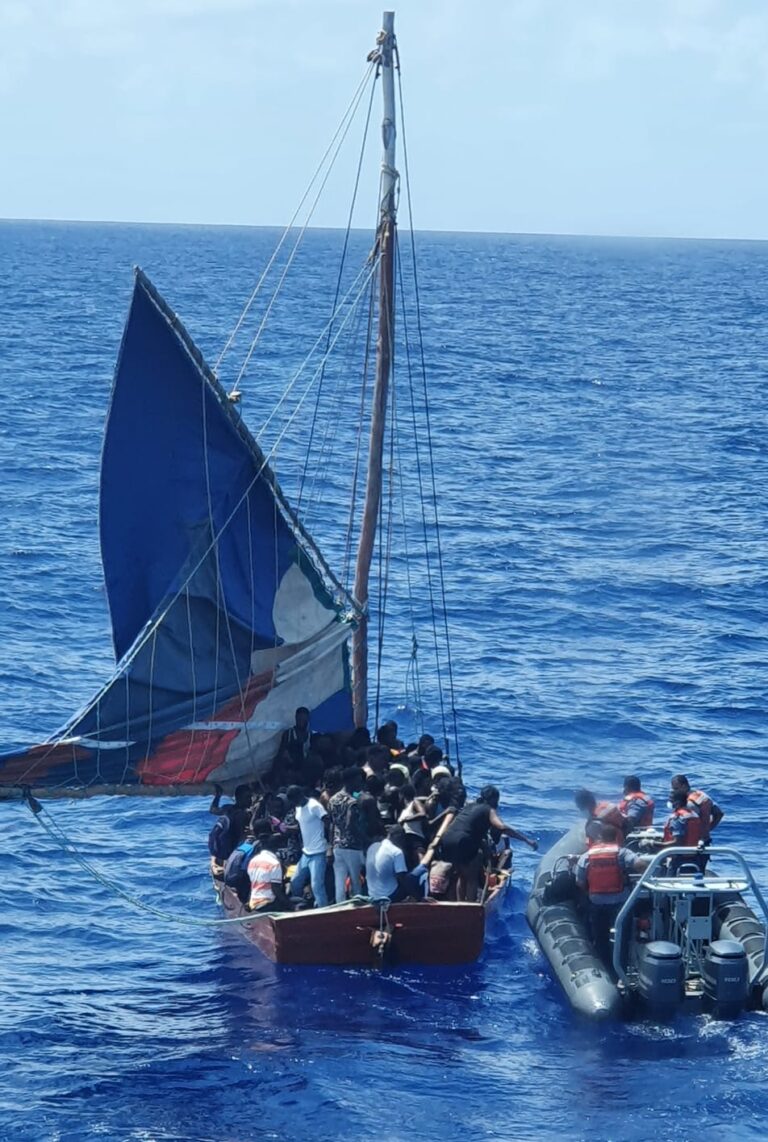 A group of Haitian migrants are spotted on a sloop in the southern Bahamas on Wednesday, September 22, 2021. (RBDF)

NASSAU, BAHAMAS — Minister of Foreign Affairs and the Public Service Fred Mitchell said yesterday that the government has requested the attorney general to review the law related to the repatriation of undocumented migrants suspected of entering the country illegally.

He added that it was a “mistake” for the former administration to agree to court intervention in this process.

In a 48-hour period, more than 350 Haitian migrants were apprehended and detained on Inagua.

Late last night, the Royal Bahamas Defence Force (RBDF) reported that another group of more than 400 suspected Haitian migrants was apprehended following the alleged capsizing and subsequent sinking of a vessel in waters off of the Exumas.

Mitchell, who returned with Prime Minister Philip Brave Davis from New York for the 76th United Nations General Assembly, told the media yesterday that there is a “humanitarian crisis that could ensue in Inagua if that isn’t dealt with quickly”.

“A mistake was made by the last administration by agreeing that everybody has to go to court and be found guilty before they can be deported,” Mitchell said.

“There is a philosophical disagreement on that issue and we are having the attorney general have a look at the law to see whether or not this is something we can review because what happens now, I gather, a magistrate has to now fly down to Inagua; try each individual; find them guilty or not guilty — this includes children, which just points out a bit of the absurdity of it — and then once they’re convicted, they’re deported.

“Well, all of that takes time. You can imagine trying 357 people, whereas before, when we were in office, they were treated as ‘unlanded’ and therefore simply withdrew their presence from The Bahamas and sent back to their home country, and I think that should be the position.

“But of course, you know, it is subject to what the courts and the law says.”

The increase in apprehensions on the southern island comes as Haiti continues to face challenges ranging from the ongoing pandemic, consecutive natural disasters including a recent earthquake and political unrest.

The handling of migrants at borders has also become the subject of national debate in the United States as some 15,000 migrants — the majority of whom were Haitian — were camped out at the Texas border for days in hopes of gaining entry to the US.

According to international reports, US Immigration and Customs Enforcement deported around 2,000 migrants on a chartered flight to Haiti.

Purported video footage at the border showed law enforcement officials, in some instances on horses, attempting to deter the migrants from crossing the border, although the men and women went in search of food and water for their camp.

In January 2019, then Immigration Minister Brent Symonette said rather than being held for deportation, migrants who enter The Bahamas illegally will be immediately charged before the court and repatriated.

Mr. Michelle your back in office Again, please 🙏💯💯🇧🇸 continue what you started some four years ago when you was Minister of foreign affairs, matter’s as it relates to the illegal having Children in school and they the parent’s are undocumented immigrants. Please 🙏💯 do whatever is best in the interest of The Bahamas and it’s population.