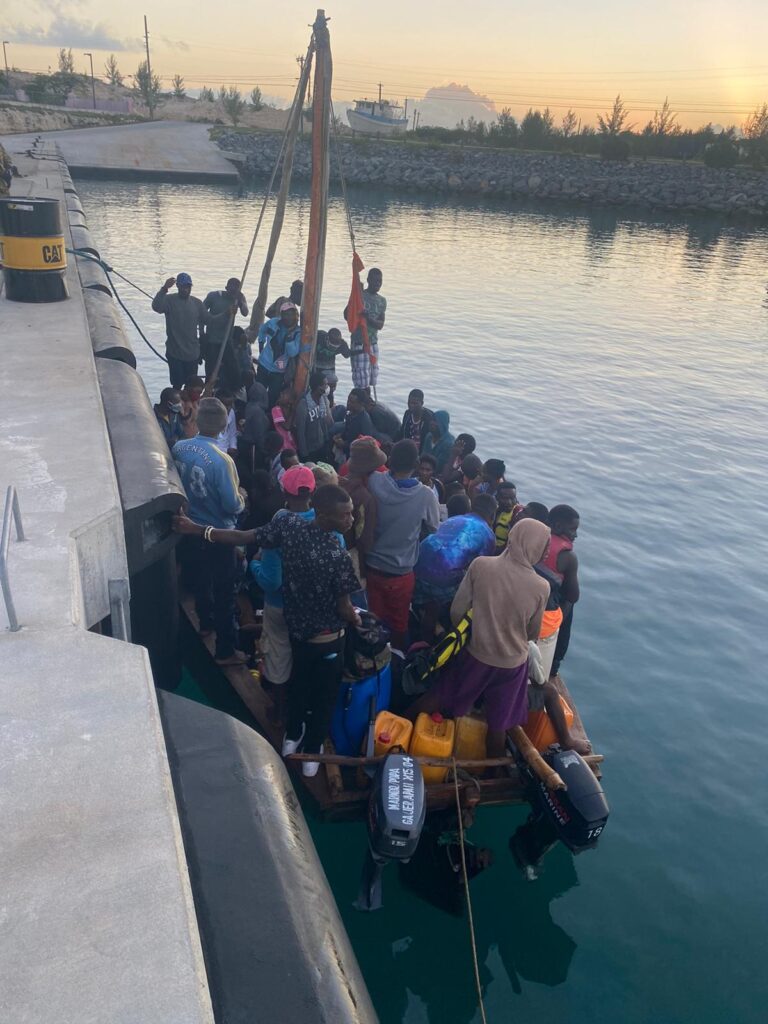 “If those individuals decide to rebel or act out of hand, we don’t have enough officers to control that situation”

NASSAU, BAHAMAS — With the number of Haitian migrants on Inagua closing in on the island’s population and more migrants expected in the coming days, several Inaguaians were fearful yesterday of a potential revolt.

Flavioa Cox, an electrical technician on the island, told Eyewitness News that notwithstanding the assurances of law enforcement officials, the situation is could take a turn for the worst.

“To be quite honest with you, right, you have a situation where the residents of Inagua are beginning to get concerned,” he said.

“Even though the Royal Bahamas Defence Force (RBDF) is telling the media and the public that we have the situation under control, but be that as it may, you are talking about hundreds of illegally migrants [held] in a field building.

“If those individuals decide to rebel or act out of hand, we don’t have enough officers to control that situation.

“Now, I do not know the officers’ training to say to you, sir, how many officers it is going to take to subdue how many Haitians. I do not know how they do that math, [if] I can be honest with you, but as it stands right now, it only takes two persons to gang one person.

“I think that is called a disadvantage.”

In a 48-hour period last week, 357 Haitian migrants were apprehended and detained on Inagua.

Another 400-plus suspected Haitian migrants were apprehended on Sunday night.

That night, an additional 144 migrants were apprehended at sea and transported to Inagua.

Hundreds more migrants are believed to be en route to the southern Bahamas from various ports of Haiti, according to King, who assured the RBDF is well-positioned to intercept them.

Hundreds of migrants were being temporarily housed at Universal Household of Faith, though Eyewitness News understand half the building was still being used to conduct services.

Several portable toilets have been erected near the church.

The situation in Haiti has worsened with political unrest, violent crime and the country recovering from recent deadly earthquakes and the assassination president.

In an interview with CNN in Haiti, International Organization for Migration (IOM) representative Louby Georges said clashes between gangs have ballooned out of control, forcing internally displaced people to leave their villages and campsites set up following the earthquake in 2010.

Tam Palacious, another resident of Inagua, said there was a level of unease settling in on the island.

“I am very, very uncomfortable,” she said.

“…Just imagine one of them break out and attack one of our officers.

“There is so much of them. We have more migrants in Inagua than people who live here.”

Novelet Turnquest, of Matthew Town, said while she is not afraid, many are fearful about an uprising.

“We only have roughly nine hundred and something people and that includes children,” he said.

“We have probably about 200 kids. So, when you look at [it], we are overpopulated by the Haitians.

“There are some people who are in great fear. I am not, but I know there are a few who I spoke with, and not only that, when you’re looking at we’re used to being free [and] sleeping and going out with our doors open.

“Right now, we can’t take that chance. Suppose some of them decide we are going to rebel, and a few of them take off in different directions. What’s going to happen?”