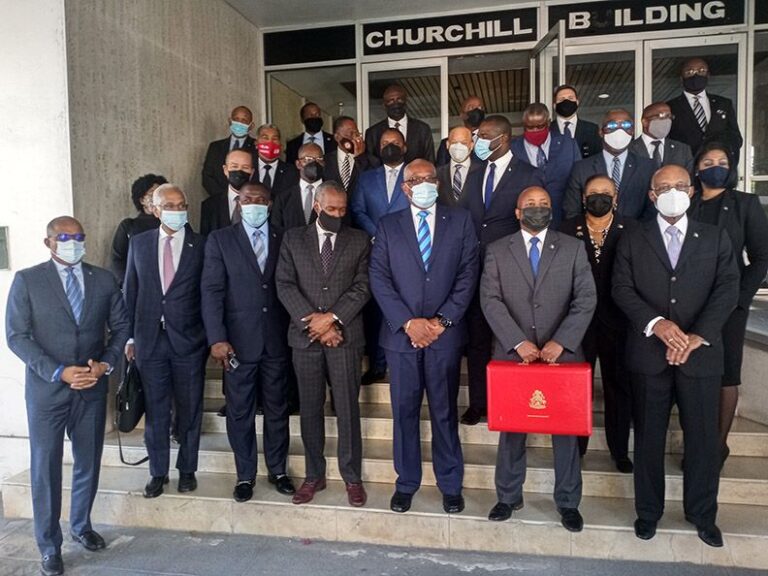 Prime Minister Dr Hubert Minnis (center) and members of his Cabinet pose for a photo on the steps of the Churchill Building on Wednesday, May 26, 2021, ahead of the 2021/2022 budget communication in the House of Assembly. (BIS PHOTO/ULRIC WOODSIDE)

“I’m satisfied that the vast majority — a silent majority — have been helped, and that, to me, is the most humbling experience in the world”

NASSAU, BAHAMAS —Two Cabinet ministers said they were grateful to have served in the Minnis administration yesterday ahead of the last Cabinet sitting before the general election on Thursday.

Frankie Campbell, minister of social services and urban development, spoke with reporters in front of the Tradewinds Building and reflected upon his tenure.

“To have had the opportunity to help organize assistance for them is a most humbling experience for me.

“Having come from a humble beginning, where I thought I had to save up to be poor, and then to be given the opportunity to actually help the poor in a way this country has never done before — to have had the opportunity to oversee the largest budget for the Social Services Department — that has been a privilege for me…

“While I know that there are still persons who are waiting to be assisted, I’m satisfied that the vast majority — a silent majority — have been helped, and that, to me, is the most humbling experience in the world.”

Minister of Public Service and National Insurance Brensil Rolle gave a positive account of his time in Cabinet as well.

He expressed: “I want to commend and thank the people of Garden Hills who saw fit to elect me.

“I did my best for them. I will continue to advocate on their behalf, but they gave me an opportunity and I’m eternally grateful to them.”

During the Minnis administration’s tenure, the Cabinet went through a series of resignations and shuffles.

Campbell himself previously served as the minister of transport and local government when the Free National Movement (FNM) assumed office in May 2017.

He assumed carriage for the Ministry of Social Services and Urban Development after Lanisha Rolle was transferred from the department and posted at the Ministry of Youth, Sports and Culture.

Rolle would later tender her resignation from Cabinet in February 2021 amid reports that her ministry was being audited, making her the fourth cabinet member of this term to do so.

Iram Lewis then assumed the portfolio of minister of youth, sports and culture after having previously served as minister of disaster preparedness, management and reconstruction — a new ministry that was formed in the aftermath of Hurricane Dorian.

Pakesia Parker-Edgecombe took over Lewis’ post in the ministry of disaster preparedness, management and reconstruction, replacing Rolle as the only woman in Cabinet.

Former Deputy Prime Minister and Minister of Finance Peter Turnquest resigned last November after an untested writ of summons alleged his involvement in a $30 million “bogus loan” scheme — an allegation he has denied.

Prime Minister Dr Hubert Minnis would then assume the portfolio of finance minister.

Elizabeth MP Dr Duane Sands resigned as health minister in May 2020 after accepting responsibility for a breach of protocol amid the country’s border closure.

In June 2019, St Anne’s MP Brent Symonette resigned as minister of financial services, trade and industry and immigration amid controversy over government contracts allegedly tied to his family.

Yamacraw MP Elsworth Johnson took over Symonette’s portfolio. He previously served as minister of state for legal affairs when the FNM came into power.