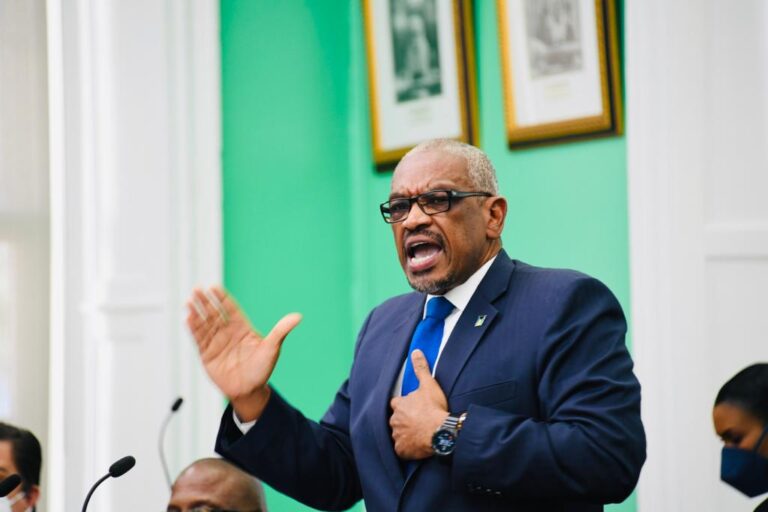 The former prime minister underscored growing fears that Bahamians will be ‘outnumbered’ by irregular migrants, adding “only a matter of time before illegals expand from shantytown to shanty housing”.

He declined to expand on his comment concerning “shanty housing”.

In an interview with Eyewitness News, Minnis called on Prime Minister Philip Davis to “lead and come forward” with a cohesive plan and underscored the need for the United Nations and the United States to do more to stabilize Haiti.

The prime minister underscored the influx of undocumented Haitian migrants posed health risks due to the current outbreak of cholera in Haiti, as well as a negative impact on the country’s tourism industry.

He urged the government to increase border patrols; scrutinize the issuance of visitor visas; seek to lift the injunction blocking the demolition of some shantytown structures; and legislate the immigration policy on work permits enacted last term. He also called for a crackdown on employers hiring undocumented workers.

“It’s essential to deal with shantytowns because Haiti is in a meltdown,” Minnis said.

“The government structure is in chaos, crime and violence are out of control, gangs roaming the streets, and Haiti has an outbreak of cholera.

“Therefore individuals within the shantytown run the risk, that is illegal immigrants coming in, run the risk of introducing cholera into our shores which would have a great impact not only on the health system but our tourist industry.

“What plans does the government have in place to ensure the protection of our tourist industry and our health system with respect to cholera? It is a serious problem to deal with Haiti has a population of 12 million people, The Bahamas has a population of 400,000 and Bahamians are frightened that the illegal immigrants will soon outnumber the Bahamian populous, which can have devastating effects moving forward.”

He noted the visa department was shut down during the previous term due to an investigation into an illegal racket.

He lamented that shantytowns and work permits are increasing while thousands and thousands of Bahamians are unemployed and searching for employment. He questioned how many visitor visas are being issued for Haitian nationals per week, and whether there was an effective policy or protocol to protect against overstaying.

Minnis said: “There is a policy that no individual can apply for a work permit for the first time from within the country. It should be legislated, that was the main objective of my government.”

“They must increase the border patrol and we had plans of constructing a detention centre in Inagua, the facility would have been able to be utilized for hurricane shelter. We introduced a policy where [irregular migrants] caught in different islands were not transported to New Providence but that a magistrate traveled down there and had a trial and repatriated them.”

In a statement over the weekend, the Department of Immigration said work on a temporary processing and detention facility in Inagua was completed last month.

The facility can temporarily house more than 800 people and was prepared in collaboration with the Royal Bahamas Defence Force in anticipation of an increase in migrant interceptions.

Minnis also pushed back against recent comments by Bahamian Contractors Association’s (BCA) president Leonard Sands, who suggested the construction industry depended on undocumented workers to complete projects, and would collapse without them.

“You can’t go and allow that to happen. If that’s the situation then we need to further accelerate the training of Bahamians. So what, as we develop we just continue to marginalize ourselves and just allow companies to hire illegals just to ensure that their business continues? No, no.”

Minnis added: “We have a law, we have a constitution, and we have to follow the constitution, individuals who are entitled to regularization should be regularized, that’s the constitution. But we must at the same time, man our borders and apply the law to the fullest extent to Bahamians who are employing illegal immigrants.”