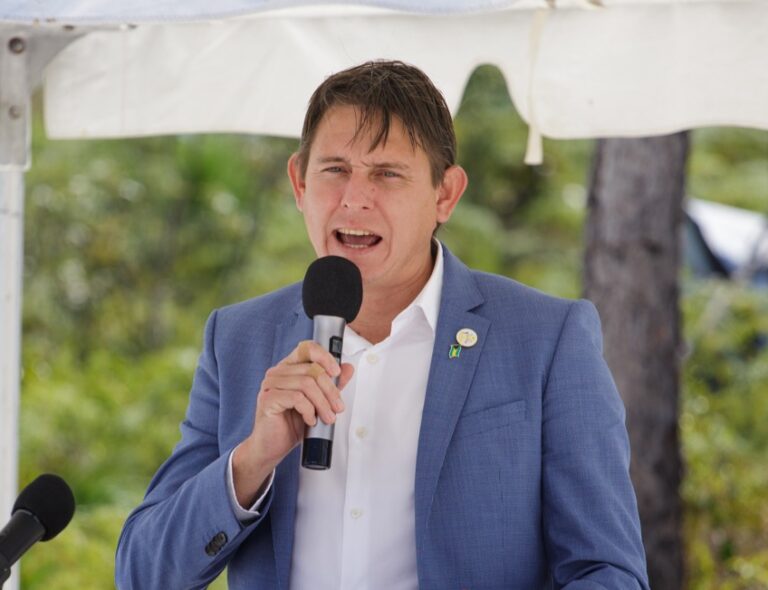 Pinder told reporters outside Parliament that Abaconians were in danger of losing “our father’s place”, and expressed concerns over sanitation and wider disregard for permit laws.

He noted the issue has been growing for many years with little to no action as he expressed confidence in the multi-agency task force set up by the Davis administration.

“I am hopeful, I am optimistic, Abaco needs the help to take control, regain control of our island,” Pinder said.

“It’s concerning to me because there isn’t any sanitary infrastructure at hand. There isn’t the proper permitting and things are being done that Bahamians and my fellow Abaconians can’t do. We abide by the law, there is a certain procedure in place that makes a safe place for everyone to live, and right now those areas that we are describing aren’t doing that and that’s a problem.

Pinder said: “The whole issue is going to come to a boiling point. It’s either we act now or we’re going to lose our father’s place. Our ancestors settled there, they spent a lot of time growing what communities we have and we want to make sure that they are there for future generations to come.

He added: “I’m optimistic that this Davis-Cooper administration will do what’s needed to fix this problem.”

Bell noted that The Bahamas is currently faced with an influx of Cubans and Haitians who are being intercepted at sea.

“Cuba is experiencing the worst economic crisis in 30 years. The pandemic fall-out has played a major role in food shortages which is compounded by rising inflation and trade embargoes. Haiti continues to experience widespread violence and political instability. Haitians have faced a surge of gang attacks, kidnappings, fuel and electricity shortages, a deepening political deadlock, and a deadly outbreak of cholera,” Bell said.

Bell said that only a strong international response by the world’s leading economies can help to remedy the situation.

“While we hope and pray that the international community provides assistance to Haiti and Cuba, we must continue to protect our borders and enforce our immigration laws.”

He added: “The Bahamas cannot accept an evening increasing number of migrants without a corresponding deterioration of the quality of life for us all.”

Pinder’s comments follow wider calls by Coalition of Independents Leader Lincoln Bain for legislative changes and greater enforcement to address illegal immigration and the expansion of shantytowns in the country.

Yesterday, Labour and Immigration Minister Keith Bell underscored The Bahamas is currently faced with an influx of Cubans and Haitians who are being intercepted at sea. He noted that Cuba is experiencing the worst economic crisis in 30 years, while Haiti continues to experience widespread violence and political instability.

Bell noted Statistics from the Department of Immigration have revealed a significant increase in the number of migrants intercepted in Bahamian waters over the past two years.

He warned illegal migrants in the country to immediately wind up their affairs and leave voluntarily or face deportation.