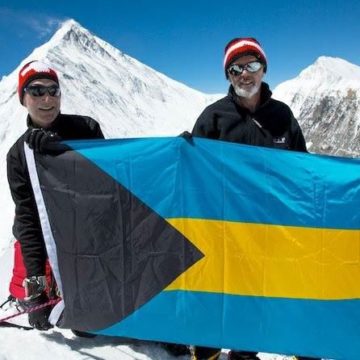 Billionaire Harald McPike, an Austrian-born resident of The Bahamas, has settled a United States lawsuit against North-Virginia based Space Adventures (SA) Limited after two years of litigation over a $7 million deposit for a “circumlunar space flight” to the moon.

McPike sued the company in federal court in Alexandria in May 2017 for fraud, consumer fraud, breach of contract, conversion and unjust enrichment arising out of the planned circumlunar space flight.

In court documents, Zero-Gravity Holdings Inc., Space Adventures, and Thomas Shelley and Eric Anderson — the president and chairman of the board respectively — are listed as the defendants.

In his affidavit, McPike is described as an investor and adventurer who has skied to the North and South Poles and scaled some of the world’s highest peaks.

“A mission to the moon literally was to be his final frontier,” read the affidavit.

According to its website, Space Adventures was founded in 1998, is the “world’s premier private spaceflight company, and the only company currently providing opportunities for private astronauts to fly and live in space”.

The company claimed to have arranged eight spaceflights for seven clients, who have cumulatively spent over 80 days in space and traveled nearly 30 million miles in space.

Of the circumlunar space flight, the company commits to using fly-proven Russian space vehicles to fly two private citizens and one professional cosmonaut on a free return trajectory around the far side of the moon.

According to court documents, Space Adventures marketed the unique space travel opportunity in 2012 and allegedly represented that the space flight could reasonably be expected within six to eight years.

In an email dated July 30, 2012, Roxanne Trust of Space Adventures wrote that the price of the mission over the next several years would start at $150 million with many factors that could affect that price, including the year of the launch, mission duration and the mission profile.

“I will be happy to discuss program details and conditions with you.

“Please let me know if spaceflight is something you would like to do in the next two to five years.”

Anderson met with McPike and others in The Bahamas between September 30 and October 1, 2012 where the chairman “made clear that the circumlunar mission was expected to be accomplished in not more than six-eight years”, according to McPike’s affidavit.

He noted that the timing was important because he was concerned that the longer it would take, the greater the risks that he would not be able to make the space journey.

A contract was agreed in March 2013 between the parties, with McPike paying a $7 million installment for the space excursion.

The second installment of $8 million would be due one year from the execution of the date of the agreement.

A third installment of $15 million would be due another year later. McPike was to make a subsequent payment of $60 million upon receipt of written notice from the Russian Federation that the circumlunar mission will occur with him as a crewmember and specifying the intended launch period, including the planned launch date.

Another $30 would be due within 10 business days of the start of the space flight training.

The agreement included strict confidentiality, non-competition and non-circumvention provisions that effectively forbade McPike from contacting Russian Federation space agencies directly and without Space Adventure’s involvement, according to the affidavit.

“The provisions — reinforced by instructions from defendants not to communicate directly with the Russian Federation space agencies — prevented [the] plaintiff from learning of [the] defendants’ misrepresentations.

In early June 2014, McPike proposed putting the payments into a letter of credit with a bank to mitigate against arising risks, and was willing to increase the total cost of the space experience to $170 million.

The amended agreement was never reached, however,

Space Adventures terminated the agreement in March 2015, and retained the $7 million, according to court documents, which said McPike subsequently sought to arrange a space flight directly with the Russian Federal Space Agency.

But he claimed he instead learned through communications that Space Adventures allegedly had no agreement with the Russian Space Agencies to provide the circumlunar experience to private individuals.

He said the company’s acts and omissions constituted a breach of the agreement, alleged fraud in the inducement of a contract and a violation of the Virginia Consumer Protection Act.

In July 2016, Roscosmos, the successor agency to RFSA, said while it had successfully conducted seven commercial space flights on the Russian ‘Soyuz’ manned transport vehicle with the involvement of Space Adventures, at that time there was no valid documents containing any legal obligation of Roscosmos to Space Adventures, and prior to receiving McPikes’ letter, it was unaware of his contract with SA.

Space Adventures sought to have the cases dismissed, saying it performed all of its contractual duties up until the contract was terminated in 2015.

It said the agreement had provisions for termination of the contract by choice or for non-performance or material default, which would result in a refund of all prior payment except for the initial installment of $7 million.

It accused McPike of seeking to recover the $7 million in damages via a “fictional breach”. It maintained that it had rights to provide McPike the opportunity to participate in the circumlunar space flight and accused McPike of unsuccessfully attempting to renegotiate the terms of the agreement in October 2014.

SA also claimed in court documents that by the time McPike terminated the contract, it had paid for rights to Energia to provide the opportunity for the space flight, paid for completion of the technical design and concept analysis required for determining the feasibility of the mission, and arrangement for McPike to attend two presentations by Energia officials and engineers in Russia, among other expenses, all of which were redacted in court documents.

The settlement, which was finalized in April, is sealed.

The Washington Post reported that each side agreed to pay its own legal costs, but what the two sides ultimately decided was unclear.