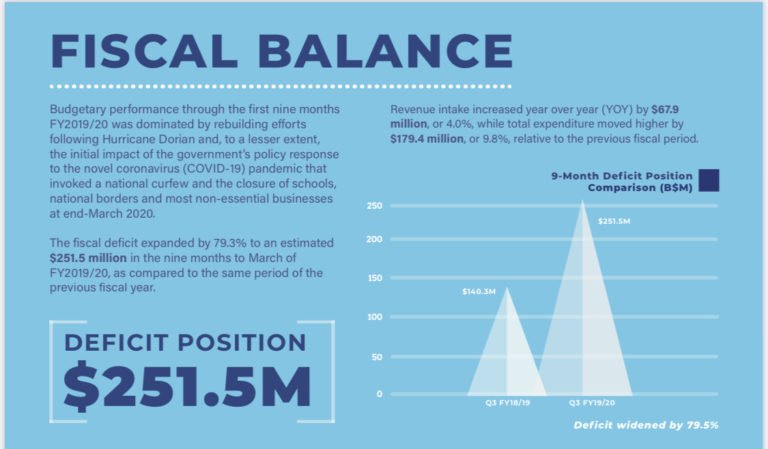 NASSAU, BAHAMAS — The fiscal deficit widened by nearly 80 percent to an estimated $251 million in the nine months to March of fiscal year 2019/2020 when compared to the same period in the previous fiscal year, the Ministry of Finance has reported.

The fiscal deficit expanded to an estimated $251.5 million through March of fiscal year 2019/20, up from $140.3 million in the corresponding period of the previous fiscal year.

The Ministry of Finance also noted that total revenue increased by nearly $70 million during the period despite the decline in business activity on storm ravaged Abaco and Grand Bahama. Total expenditure also grew by nearly $180 million due to Hurricane Dorian related recovery and restoration expenses.

In a statement on the combined nine-month fiscal snapshot and report on budgetary performance for fiscal year 2019/2020 (July-March), the ministry noted that budget performance in the third quarter report was dominated by rebuilding efforts associated with Hurricane Dorian and, to a lesser extent, the initial impact of the government’s policy response to the novel coronavirus (COVID-19) pandemic.

It noted that the full impact of the public health crisis and economic shutdown is not expected to be seen fully until the fourth quarter report.

“In the first nine-months, the fiscal deficit widened by an anticipated 79.3 per cent to an estimated $251.5 million,” the report read.

“Despite the temporary decline in business activity in the storm-affected islands of Abaco and Grand Bahama, total revenue grew by $67.9 million to total $1,757 million. This increase, which represented 73.3 per cent of the revised budget target, was bolstered by the high volume of cruise arrivals up to February 2020 that strengthened departure taxes by $5.6 million, or 5.4 per cent.”

Still, given the significant expenditure on hurricane recovery and restoration and other spending priorities, total expenditure grew by $179.4 million, impacting the overall fiscal outcome for the budget period.

Deputy Prime Minister and Minister of Finance K Peter Turnquest said: “We anticipated a spike in recurrent expenditure because of the allocations we made to increase capital expenditure, and to provide various allowances and support to essential workers of the public service and staff displaced by the hurricane among other things.

“Further, we addressed several other spending priorities like union payments to civil servants and additional cash injections into the public health system that were foreshadowed earlier this year. Of the total increase in expenditure, over $80 million can be directly attributed to new expenditures.

“We really started to see the fiscal impact of Hurricane Dorian materialize in the third quarter numbers. Obviously, the COVID-19 pandemic is going to further weigh on our fiscal performance, likely leading to a missed budget deficit target.

Turnquest said: “To carry us through the remainder of the fiscal year, we will continue to reprioritize expenditure and adjust within our existing contingencies and borrowing authority.”

The Ministry of Finance also noted that the impact of Hurricane Dorian was also felt in several revenue centers.

“Following the execution of various Exigency Orders, collections of customs and import duties softened by $4.8 million, or 2.4 percent, to $194.6 million (69 percent of the budget),” Turnquest said.

“Similarly, taxes on international trade tapered by 0.1 percent, or, $0.5 million, and taxes on exports narrowed by $1.3 million, or 13.7 percent, over the nine-month period.

He added: “The dual fiscal and economic impact of Dorian and COVID-19 is setting the stage for yet another unprecedented budget that will be necessary to navigate a successful recovery. As the country traverses uncharted territories, the Government will take the necessary steps to ensure adequate resources are made available for the critical health and other needs, while at the same time maintaining the core integrity of the Bahamian economy and society.”