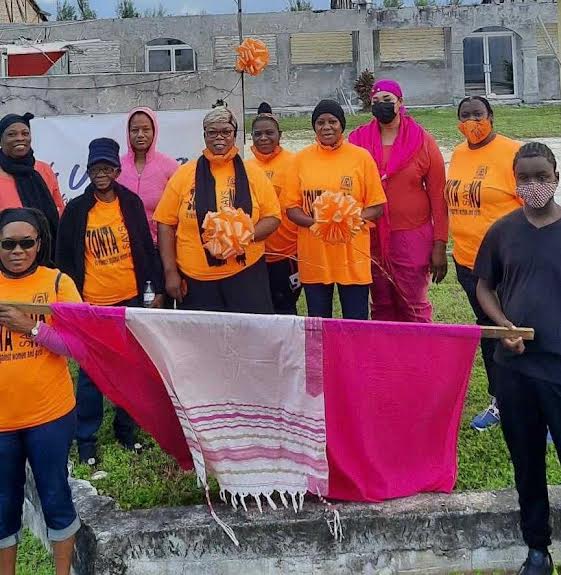 NASSAU, BAHAMAS — Women of the Zonta Club on Eleuthera and Abaco brought the Orange the World campaigns to life on their islands, spreading the word that people everywhere should say “no” to gender-based violence.

On Abaco, Zonta representative Eva Bain spent the campaign going from settlement to settlement. Residents from six communities were educated about the importance of having healthy relationships and an empowering society, free of violence. The settlements turned orange were: Sandy Point, Crossing Rocks, Spring City, Marsh Harbour, Treasure Cay and Cooper’s Town.

Zonta’s representative on Eleuthera, Jewel Edwards, brought the theme to life for another year with the help of not only adults, but many of the children. With kids taking part in advocacy, Edwards knows communities on Eleuthera have a brighter future without violence. Central and South Eleuthera Member of Parliament Clay Sweeting and his wife joined the activism.

Zonta Club of New Providence (ZCNP) once again led the charge for the advocacy campaign with a host of events held on New Providence. Each year, ZCNP chooses a community to focus its advocacy on; this year, it was Englerston.

There, Zontians turned the community orange, tying bright orange bows from street to street. Ann Marie Davis, representative of the Office of the Spouse of the Prime Minister, and former representative Patricia Minnis together tied the first bow.

But days later, a horrible domestic violence incident was filmed as a woman was dragged by a car right through the streets of Englerston. That led Zontians to increase the campaign, taking to the streets and radio stations to make a plea for Bahamians to put an end to gender-based violence.

On December 10, International Human Rights Day, Zonta culminated the 16 days of advocacy with an event attended by Minister of State for Social Services and Urban Development Lisa T Rahming; Dr Calae Philippe, director of Family and Gender Affairs; and other dignitaries.

Yesterday, Zontians pinned orange bows on senators in the Upper House. On Sunday, a virtual church town hall meeting was held to bring educational awareness and accountability, and make a call to action for churches to spread the message.

Zonta is an international organization focused on educating and empowering women and girls. ZCNP had been leading the advocacy campaign to end violence against women and girls and gender-based violence for the past nine years.