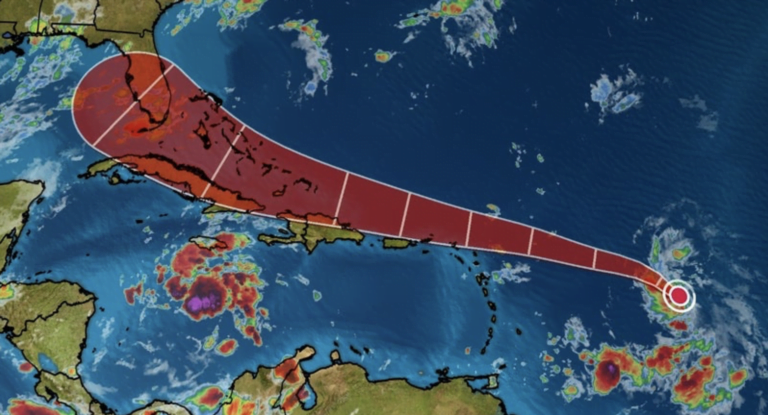 Earlier projections for then TS Laura on August 20, 2020 (FILE PHOTO)

NASSAU, BAHAMAS — A tropical depression in the Atlantic that continues to creep closer to The Bahamas is projected to develop into a tropical storm later today, according to meteorologists.

It has maximum sustained winds of 35 miles per hour.

When contacted, Director of the Department of Meteorology Trevor Basden said the depression could develop into a hurricane..

Basden said by Friday the weather system could have winds of 45 miles-per-hour based on current modeling.

He said it is projected to have winds over 70 miles-per-hour by Sunday as it passes over the Turks and Caicos Islands and portions of the southern Bahamas.

As it passes over central Andros, models show wind speeds increasing to hurricane force strength at 75 miles per hour — categorizing it as a Category 1 Hurricane.

“We will be monitoring it carefully,” Basden said.

“We are giving the information, so the general public and interests in The Bahamas could have a good idea of how the system would develop.”

A tropical storm alert remains in effect for the islands of the southeast Bahamas.

A tropical storm alert also remains in effect for the Turks and Caicos Islands.

Residents in the Turks & Caicos Islands and the southeast Bahamas should begin making preparations for tropical storm conditions beginning early Sunday morning,” the Department of Meteorology said shortly before noon.

“Residents in the northwest and central Bahamas should closely monitor the alerts issued by the Bahamas Department of Meteorology.”

The depression was moving west-northwest at 21 miles per hour, a gradual increase in speed overnight.

At 11am, the center of the depression was around 750 miles from the Leeward Islands.

Authorities in Antigua, Barbuda, St Kitts and Nevis and Anguilla have issued a tropical storm watch.

It is projected to track near the Leeward Islands as a tropical storm with rain and thunderstorms later Friday into Saturday, the center said.

“On the forecast track, the depression is expected to move near or north of the northern Leeward Islands by late Friday and near or north of the Virgin Islands and Puerto Rico on Saturday,” the center said. “The depression is expected to produce 1 to 3 inches of rain with isolated maximum totals of 5 inches over the northern Leeward Islands, and maximum totals of 3 to 6 inches over Puerto Rico and the Virgin Islands through Sunday.”

Thank you for the info.