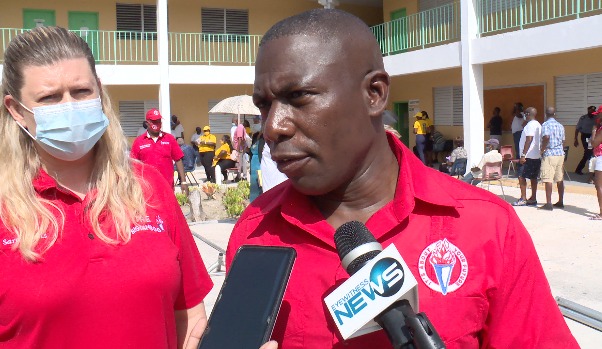 Minister of Health Renward Wells speaks to Eyewitness News during the advance poll on Thursday, September 9, 2021, as his wife looks on.

NASSAU, BAHAMAS — Minister of Health Renward Wells suggested the government could follow similar guidelines utilized by the United States during its November 2020 election in accommodating quarantined and COVID-positive voters at the polls, stating: “I think we’re taking that same tact, that same model.”

Wells made the comment to reporters while at CV Bethel Senior High School, where residents in the Bamboo Town and South Beach constituencies cast their ballots in the advance polls.

Wells said: “There’s some constitutional issues, legal issues, around that. Folks are gonna find a way to exercise their democratic right to vote.”

He noted that officials still do not know how many people may be in quarantine or isolation at this time.

“There are persons who are in quarantine who are coming out to vote.

“So, at the end of the day, we are ensuring as best as possible we treat every voter, every individual, as if they are COVID-positive.”

“On the day of election, they are making that announcement, when it has been the cry of legal experts who have confirmed that they have studied the issue extensively and advised the government to make the announcement to the public,” he said.

Cooper slammed the way Wells addressed the matter as “typical” of how the Minnis administration ran the country “flying by the seat of their pants since 2017”.

“Today, the day of the advance polls, he’s making pronouncements as to who can vote and this hadn’t been done before. This is really an unprecedented time in our country,” he said, accusing the government of failing to plan and contemplate the issue in the middle of the largest coronavirus surge seen in the country since the pandemic started.

He encouraged Bahamians to vote safely and cautioned every voter to exercise the necessary precautions as they take to the polls.

There has been no official announcement to date from the Parliamentary Registration Department to the public on the COVID-19 procedure for the polls or whether a decision had been made concerning quarantined voters.

On Tuesday, Wells said the government was exploring ways to allow those individuals to vote but noted that no final decision had been made yet and health officials had strongly recommended that those people not be permitted to cast their ballots.

If thry can get in a line to vote, they can do anything else needed. Either you are a risk or you are not.