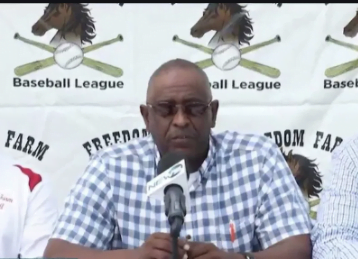 NASSAU, BAHAMAS- Freedom Farm Baseball League founder Greg Burrows Sr was one of several leaders in the local sporting community to express despair over the recent budget cuts made to the Ministry of Youth, Sports and Culture.

On Wednesday, Burrows said he feels that sports was not considered a priority during this year’s budget communication, even though it brings a significant amount of tourists to The Bahamas annually, and has afforded many Bahamians the chance to further their education or gain employment in their respective field.

“As a member of sporting community with a focus on youth development, I viewed with dismay slashes in the current budget totalling $5,143194.00 within the Ministry of Youth, Sports and Culture,” Burrows said.

“This is not the first time government has made significant budget cuts in this Ministry, adversely affecting our youth and athletes.

“The self-starter programs suffered the biggest cut. Again, Bahamians were able to clearly see this government’s compassion and vision for our youth on display. At a time when innovative business ideas are needed to move this country forward, this government saw fit to withdraw its support – killing hopes, killing dreams, killing the future and hurting the economy.”

“More than three million dollars that were once used to uplift, inspire, and build our children, the future of The Bahamas were unceremoniously slashed from the budget for youth initiatives in the name of fiscal responsibility, austerity and fiscal discipline. At what human costs were these cuts made?

“There is an urgent need to do more, not less, for our youth if we are to properly prepare them to confidently and competently receive the baton of leader of this country to continue its sustained growth and development. Essentially, this necessary preparation was one of the principal reasons for the establishment of the Ministry of Youth, Sports and Culture.”

This clearly shows that the youth of this country is not a priority in this Government’s planning.