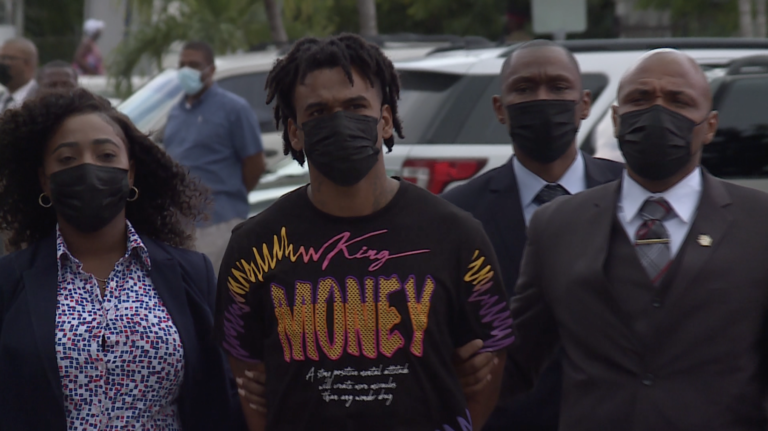 NASSAU, BAHAMAS — Five men, aged 21 to 25, appeared in a Magistrate’s Court yesterday in connection with seven murders stemming back over two years, including the June 2019 killings of Ian “Irie” Porter and Raymond Adderley.

Delanzo Cartwright, 25, of Avocado Street, Pinewood Gardens, was charged with the murders of Porter, 48, and Adderley, 46, who were gunned down in front of a residence in Star Estates Subdivision, off Prince Charles Road, on June 28, 2019.

Cartwright was also charged with the murders of George Deveaux and Ashlee Hilton on December 3, 2018, and one count of conspiracy to commit murder of the same.

Hilton, 30, and Deveaux, 33, were ambushed and shot dead as they exited the parking lot of Sandilands Rehabilitation Centre on Fox Hill Road South.

Cartwright was not required to enter a plea to the charges.

The matter will proceed via voluntary bill of indictment (VBI) on November 29, 2021.

Cartwright was granted $30,000 bail in February 2021 after being charged in June 2020 with the murders of 10-year-old Lorencia Walkes, a fifth-grade student of Sybil Strachan Primary School, and Peron Bain, and the attempted murder of Leroy Sands, who was wounded during the shooting.

As a condition of bail, he was to be tagged with an electronic monitoring device.

The men were not required to enter pleas to the charge.

The accused were denied bail and remanded to the Bahamas Department of Correction Services (BDOCS).

The matter will proceed to the Supreme Court via a VBI on November 29, 2021.

Cartwright was not alone in being charged with multiple murders.

Dondre Williams was also charged with the December 3, 2020 murder of Alfred “Halfman” Bastian and with conspiracy to commit murder.

Bastian was shot dead outside a home in Cooper’s Terrace.

Williams was not required to enter a plea and will also return to court via a VBI on November 29.

Meanwhile, Rashad Stubbs, 24, of Morning Street, was charged with the murder of Dwayne Cargill on April 27, 2021.

Stubbs was not required to enter a plea to the charge.

He was remanded to BDOCS and will return to court via a VBI on December 2, 2021.

The Magistrate’s Court does not have the power to consider bail for the offenses of murder and other serious crimes, however, the accused can apply for bail through the Supreme Court.