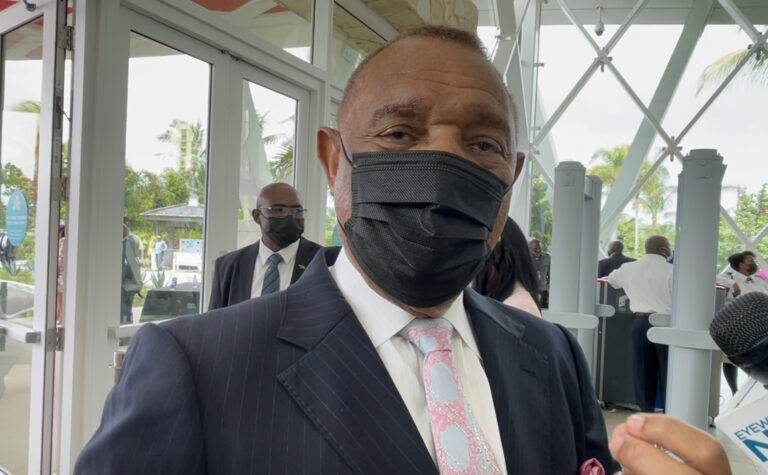 NASSAU, BAHAMAS — The Davis administration has ushered in a paradigm shift in women leaders in public service, a move that paves a bright future for women who aspire to lead and serve the nation, former Prime Minister Perry Christie told Eyewitness News.

“The new speaker of the House of Assembly spoke to the need; Glenys Hanna-Martin spoke to the need for more women to be in public life and the Davis government was a wonderful start in deepening and broadening the involvement of women in politics, and even in the responsibilities allocated to them,” Christie said.

“So, ministers, speakers; it’s a really good opportunity for the country to be able to witness it, and two, to watch these women go about delivering on the promises of a new government, and being seen to be effective — not only effective messengers, but effective doers of the work of the government.

“I think Brave Davis has created a platform and that platform will lend him plenty of success in the future.”

Women serve as both House Speaker and president of the Senate — a first in Bahamian history.

During the opening sessions of the House and Senate on Wednesday, Bamboo Town MP Patricia Deveaux was elected as speaker and J Lashell Adderley was appointed as president of the Senate.

Deveaux was elected as the 55th speaker of the House after Englerston MP Glenys Hanna-Martin nominated her and Elizabeth MP Jobeth Coleby-Davis seconded the nomination.

She is the second woman to serve as speaker of the House of Assembly.

Seven women secured seats in the House on the Progressive Liberal Party’s ticket in the general election.

The Free National Movement nominated seven women in the September 16 general election, but none were able to win their seat.

In August, when PLP Leader Philip Brave Davis — then leader of the opposition — was asked if he was satisfied with the number of female candidates ratified, he said: “We are satisfied, but we will continually press to have women involved in the governance of this country.”

He said: “There is another mechanism that I will be able to engage to ensure that women are well represented at the parliamentary level — that is through the Senate, and you will see that at the appropriate time.”

Hanna-Martin remains the longest-serving female parliamentarian in The Bahamas’ history, serving a consecutive four terms as Englerston MP, since 2002.

Her latest win last month will be her fifth term serving as the Englerston MP.

Allyson Maynard-Gibson, a former Cabinet minister of the Christie administration, served in Parliament for approximately 10 years.

Dame Ivy Dumont, a representative of the FNM, served in Parliament for approximately 13 years, becoming the first female governor general during that time.

In 2002, Cynthia “Mother” Pratt, also a member of PLP, became the first female deputy prime minister of The Bahamas.