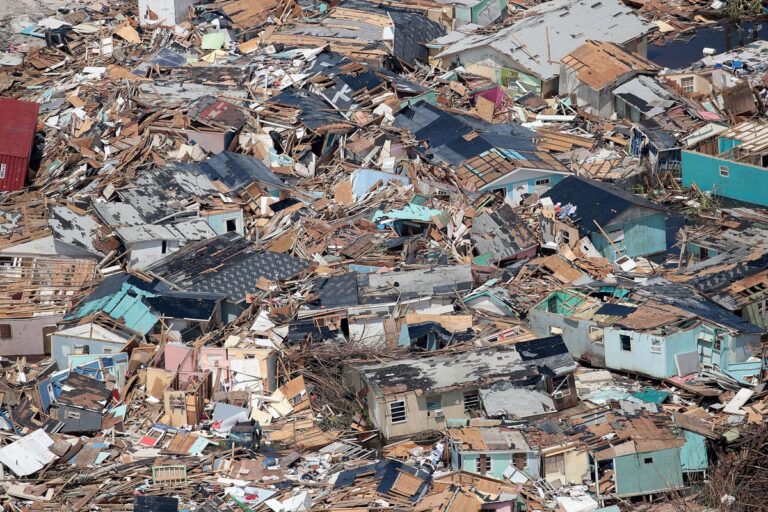 An aerial view of damage caused by Hurricane Dorian is seen in Marsh Harbour, Abaco, on September 4, 2019. (PHOTO: SCOTT OLSON VIA GETTY IMAGES)

NASSAU, BAHAMAS — A former permanent secretary has been appointed to conduct a review of the handling of Hurricane Dorian to determine if a commission of inquiry is needed, advised Prime Minister Davis yesterday.

Davis responding to questions about the from reporters following a tour of the Royal Bahamas Police Force facilities,

“I have a former permanent secretary of the government, giving me an assessment of what he sees in relation to the consequences of Hurricane Dorian and where we are with recovery efforts,” he said.

“I’m waiting for that report. Once I get that report I will know whether I do have to have an inquiry on that.”

Dorian devastated parts of Grand Bahama and Abaco in early September – claiming the lives of a confirmed 74 and displacing thousands of residents.

The number of reported missing people continues to be disputed with officials publishing and quoting different numbers since the deadly storm.

While in opposition, Davis and the Progressive Liberal Party (PLP) called for an investigation and inquiry to determine the fate of the missing and the handling of the post-Dorian response.

During a contribution to the 2020/2021 budget debate in June last year, former Health Minister Dr Duane Sands made a damning criticism of the government’s handling of the missing and dead in the wake of the deadly Category 5 storm and called for a coroner’s inquest to bring closure to grieving families.

At the time, Sands acknowledged that there had been no explanation given on how hundreds of names were excluded from the list of people reported missing from Hurricane Dorian.

The former minister said there was too little focused attention on the management of the issue – revealing that responsibility was spread over multiple ministries and government agencies.

In October 2020, then Social Services Minister Frankie Campbell advised Parliament that records from his ministry indicated a total missing count of 1,208 – 1,003 in Abaco and 205 in Grand Bahama.

The Tribune reported that the Ministry of Social Services had moved to publish an advertisement in its paper on October 10, featuring the names of 1,208 missing people but the ad was pulled amid confusion about the correct figures.

However, then National Security Minister Marvin Dames later advised that police only had reports of 282 people still missing from the storm – and that the matter was under the purview of the Royal Bahamas Police Force.

While police reported that missing person reports were filed for only 33 people, Assistant Commissioner of Police Solomon Cash acknowledged the number of reported people missing to the police force does not match the number of victims recovered following Dorian.

Fifty-five unidentified Dorian victims were buried in Abaco in May 2020 during a ceremony that was widely criticized.

Earlier this year, a coroner’s inquest officially declared dead 22 people who were reported missing by family members in the storm’s wake and ordered death certificates be produced for them.

Under the current law, there is a seven-year wait period before anyone can be declared dead in absentia.

For over a month, then Coroner Jeanine Weech-Gomez heard testimonies from relatives of those individuals, recounting the last time they saw or spoke to their loved ones and experts who participated in the rescue and recovery efforts, either in person or virtually via Zoom, Skype or Whatsapp.

The coroner did not specify when the inquest is expected to continue with additional testimonies from the relatives of other people reported missing.