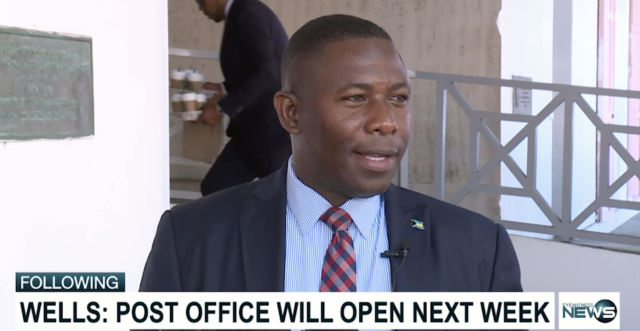 NASSAU, BAHAMAS – After months of delays, the General Post Office will finally open next week at the Town Center Mall, according to Minister of Transport and Local Government, Renward Wells, who is charged with the responsibility of the country’s mail hub.

Wells told reporters before heading to Tuesday’s Cabinet meeting, that post office executives are presently taking care of some housekeeping matters, but the building will be ready for occupation by next week.

“The phones are installed, the furniture is in,” Wells said.  “The Ministry of Works is going through its punch list, looking at tiles and little defects, and asking the landlord to make good on these defects.”

Meanwhile, the government faced several hiccups before it was able to relocate to the Town Centre.

The former administration was set on having the General Post Office relocated from East Hill Street to the Independence Shopping Centre, after it had entered into a contract with Scott Godet.  But these plans later changed when the Minnis Administration came into governance in 2017 and made the announcement that the Post Office would move to the old Phil’s Food Services building on Gladstone Road.

This move, however, was later changed in October when the newly-appointed Transport Minister, Renward Wells, announced that the building would cost way more than the government intended to spend on relocation efforts.

He later announced that operations would move to the Town Centre Mall.

The Town Centre Mall is partially owned by Minister of Immigration and Financial Services, Brent Symonette, and it brought into question the government motives for their choice.

After the move was passed in the House of Assembly, renovations began and Minister Wells announced that the Post Office employees would be in the Town Centre Mall space by Christmas 2018.

The move was delayed until February of 2019 and then again until May 2019.

Yesterday, Minister Wells said the move is on track and a date for the official opening will be announced shortly.