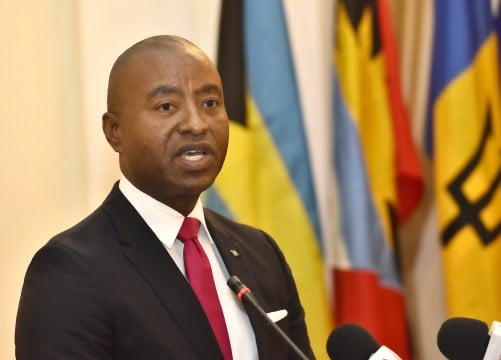 NASSAU, BAHAMAS — Minister of Foreign Affairs Darren Henfield said yesterday the government cannot afford to risk the safety of Bahamians or the potential for The Bahamas’ economy to rebound by allowing travelers from Haiti where he said protocols continue to be shirked.

On Wednesday, the competent authority extended the travel ban on Haiti for an additional 30 days, beginning May 12.

Haiti has yet to implement a vaccine program.

When asked whether the travel protocol, including obtaining a negative RT-PCR COVID-19 test, was not sufficient to mitigate against imported infections from Haiti, Henfield said: “Remember, when we started the travel ban, it began with the carnival season and then it involved to this place now where we are, where they are not taking vaccinations.

“There is some skepticism in the reporting and it’s unfortunate,” Henfield told Eyewitness News.

“This is a fellow CARICOM country. It is unfortunate, but the COVID virus and the variants that we are seeing, we simply cannot take risks.

“We cannot take risks, not now. There has to be more certainty.”

Despite this, the country of more than 11 million has reported just over 13,200 cases and 266 deaths.

While top infectious disease experts in Haiti previously said the nation’s low cases can be attributed to strict adherence to mask-wearing and social distancing guidelines, health experts said this week the reopening of travel into and out of the country has led to a resurgence of cases, and reported numbers were lagging behind actual cases.

Eyewitness News understands several Bahamians were stuck in Haiti due to the ongoing travel ban.

According to Henfield, five Bahamians were repatriated to The Bahamas last week amid the ongoing travel ban.

“We did a flight last week,” he told Eyewitness News.

Henfield said Bahamians in Haiti seeking to return to The Bahamas should first register with the Bahamian Embassy in Haiti to make the Ministry of Foreign Affairs aware, and then additional repatriation flights can be explored.

“We can look at how we bring them home,” he said.

“Unless you have a US visa where you can leave Haiti and travel through the US to catch a flight and come home, it is very difficult.”

Asked about arranging additional repatriation flights from Haiti, the minister said it was “fortuitous” that the ministry was able to arrange it and get the government to approve it.

“They’re Bahamians; we don’t want them stuck there, but we are where we are,” he noted.

“As we explained in the release, Haiti has not accepted the COVAX [Facility arrangement]. They’re not vaccinating people and the health professionals are saying it’s not safe — not safe for the moment.”

Additionally, Henfield said the government has been pleased with efforts in-country to vaccinate Bahamians and other eligible groups.

He said it is hoped that as more people become vaccinated, the faster the government can expand the reopening of the economy.

He said the interest of visitors wishing to travel to The Bahamas is promising and the government will continue to expand the vaccine program.