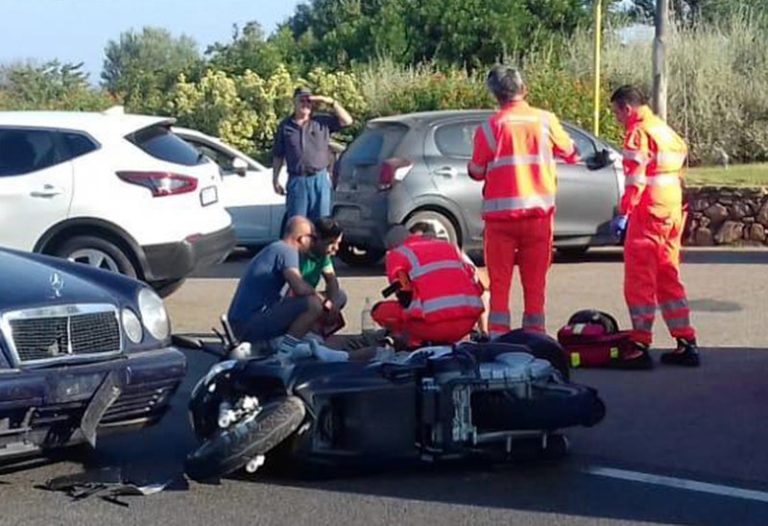 Ambulance personnel tend to a man lying on the ground, later identified as actor George Clooney, after being involved in a scooter accident in the near Olbia, on the Sardinia island, Italy, Tuesday, July 10, 2018. Actor George Clooney was taken to the hospital in Sardinia on Tuesday and released after being involved in an accident while riding his motor scooter, hospital officials said. “He is recovering at his home and will be fine,” spokesman Stan Rosenfield told The Associated Press in an email. The John Paul II hospital in Olbia confirmed Clooney had been treated and released after Tuesday’s accident. Local media that had gathered at the hospital said Clooney left in a van through a side exit. (AP Photo/Mario Chironi)

OLBIA, Sardinia (AP) — Actor George Clooney slammed his motorbike into an oncoming car that turned suddenly into his lane Tuesday and was thrown several meters (yards) in the air on the Italian island of Sardinia, according to video of the crash.

“He is recovering at his home and will be fine,” Clooney spokesman Stan Rosenfield told The Associated Press in an email.

Surveillance video of the crash , apparently taken by a fixed security video, was obtained late Tuesday by the newspaper Corriere della Sera. It shows a blue Mercedes veering into oncoming traffic apparently to turn into a residential compound near Olbia. The video shows what is reported as Clooney’s scooter crashing into the car while another scooter alongside him manages to veer around it.

Clooney is thrown over the front of his bike and up in the air before landing on the asphalt, where the car driver and other witnesses come to help.

The John Paul II hospital in Olbia confirmed Clooney was treated there and released after a few hours.

Local media representatives who gathered at the hospital said the Oscar-winning actor-director left in a van through a side exit.

The newspaper La Nuova Sardegna said the 57-year-old Clooney was heading to a film set when the accident happened at a curve in the road near the entrance to the Costa Corallina residential compound in the province of Olbia.

An oil stain and police paint remained on the road. Photographs taken by someone passing the scene showed the car’s front right bumper damaged and Clooney’s bike on its side.

He has been staying at a lush, gated rental villa in the high-end Puntaldia neighborhood on Sardinia’s northeastern coast, which overlooks the Tyrrhenian Sea. Staff at the home declined to comment.

Clooney is a frequent visitor to Italy. He has a home on Lake Como and was married in Venice in 2014 to the British human rights attorney Amal Clooney.

This article was written by PAOLO SANTALUCIA and NICOLE WINFIELD, Associated Press writers.