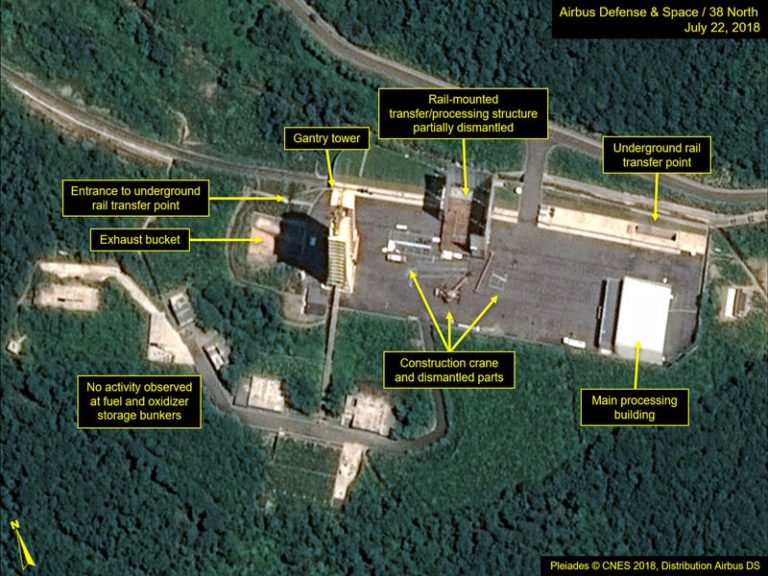 This July 22, 2018, satellite image released and annotated by 38 North on Monday, July 23, shows what the U.S. research group says is the partial dismantling of the rail-mounted transfer structure, at center, at the Sohae launch site in North Korea. 38 North said North Korea has started dismantling key facilities at its main satellite launch site in what appears to be a step toward fulfilling a commitment made by leader Kim Jong Un at his summit with President Donald Trump in June. (Airbus Defense & Space/38 North via AP)

WASHINGTON (AP) — President Donald Trump expressed appreciation to North Korea on Tuesday following reports that Pyongyang has started to dismantle key parts of a missile test site. But Trump’s top diplomat sounded a note of caution, saying inspectors would have to confirm the development.

Trump said new satellite photos indicating the North has begun to take down facilities at the Sohae site are a sign of progress from the “fantastic” summit he held last month in Singapore with North Korean leader Kim Jong Un.

“We’re all pursuing the denuclearization of North Korea and a new future of prosperity, security and peace on the Korean Peninsula and all of Asia,” Trump told a VFW convention in Kansas City, Missouri. “New images just today show that North Korea has begun the process of dismantling a key missile site and we appreciate that. We had a fantastic meeting with Chairman Kim, and it seems to be going very well.”

He spoke after the North Korea-focused 38 North website released satellite imagery taken from July 20 to July 22 that seem to show dismantlement underway at Sohae. The facilities being razed or disassembled include a rocket engine test stand used to develop liquid-fuel engines for ballistic missiles and space-launch vehicles and a rail-mounted processing building where space launch vehicles were assembled before being moved to the launch pad, 38 North said.

Secretary of State Mike Pompeo, however, expressed a note of caution. He said that while such a step would be in line with the pledges that Kim made to Trump, it would have to be confirmed by international inspectors.

“It’d be entirely consistent with the commitment that Chairman Kim made to President Trump when the two of them were in Singapore together. We made that commitment orally,” Pompeo said at a news conference in Palo Alto, California, with Defense Secretary James Mattis and their Australian counterparts.

“We’ve been pressing for there to be inspectors on the ground when that engine test facility is dismantled, consistent with Chairman Kim’s commitment,” said Pompeo, who attended the Singapore summit and has visited North Korea three times this year.

Asked what more North Korea needed to do, Pompeo replied: “That’s easy. They need to completely, fully denuclearize. That’s the steps that Chairman Kim committed to and the world has demanded through U.N. Security Council resolutions. It’s that straightforward.”

Analysts believe that Pyongyang could be trying to build trust with Washington as they engage in talks to resolve the nuclear standoff. But they say dismantling a few facilities at the site alone won’t realistically reduce North Korea’s military capability or represent a material step toward denuclearization.

And, like Pompeo, they expressed concern that the work is being done without verification.

After his summit with Kim on June 12, Trump said he was told by Kim that the North was “already destroying a major missile engine testing site” without identifying which site. The leaders concluded their summit by declaring their vague aspirational goal of moving toward a nuclear-free Korean Peninsula, but there’s lingering doubts on whether Kim would ever agree to fully give up the nuclear weapons that he may see as a stronger guarantee of his survival than whatever security assurances the United States can provide.

This article was written by MATTHEW LEE, Associated Press writer.