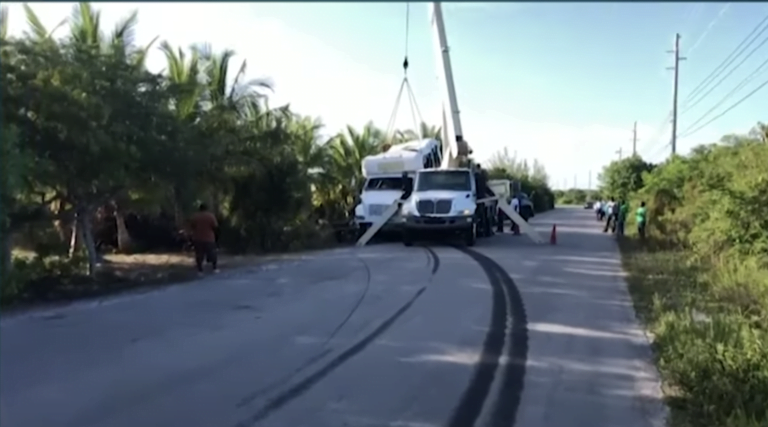 ROCK SOUND, ELEUTHERA – Mechanical difficulties reportedly caused the near fatal traffic accident in Rock Sound, Eleuthera on Monday morning, which involved 32 tourists; six of whom are currently in hospital listed in critical condition, according to sources close to investigations in South Eleuthera.

The group of tourists arrived in The Bahamas on Monday onboard the Carnival Ecstasy cruise liner, which docked at Princess Cay.

The group booked a private charter tour with Eleuthera Adventures in South Eleuthera and were scheduled to visit the Cathedral Caves.

Eyewitness News Online sources in South Eleuthera claim that at some point during the journey the power steering in the private bus malfunctioned.

“The power steering in the vehicle failed and caused the entire bus to lock up,” the source who wished to remain anonymous claimed.

“Once the power steering locked in the bus it caused everything else to shut down and the driver was unable to control the vehicle.

“I spoke with persons who were in that bus and they said he driver tried everything he could to regain control of the runaway bus; but his attempts were fruitless.”

The bus subsequently overturned in bushes on the side of the roadway.

Multiple persons on board the tour bus were injured, according to medical personnel in South Eleuthera.

While health officials have confirmed that majority of the injured were treated at the island’s clinic; six critically injured had to be airlifted to the United States and New Providence.

According to a U.S. Coast Guard official on the ground in Rock Sound, four of the critically injured were airlifted to the Fort Lauderdale Hollywood International Airport while the remaining two injured persons were airlifted to New Providence for medical attention.

When Eyewitness News Online arrived in South Eleuthera yesterday afternoon, the bus driver who was involved in the near fatal accident, Walter Pinder, confirmed that he was very “shaken-up,” but was in good health.

Hank Johnson, Central & South Eleuthera, Member of Parliament was a part of the team of first responders at the scene Monday morning.

He commended the community in South Eleuthera for its speedy and efficient response.

“The incident was an unfortunate one but I am very proud of the response efforts today,” he said.

“Medical teams and members of the community joined forces to help the injured persons.

Johnson not only assisted with initial response efforts at the scene of the accident, but also traveled to Princess Cay with the remaining passengers after they received medical attention on the island.

“Many of them are still shaken from the incident but they are grateful to be alive most of all,” Johnson said.

According to authorities there were no casualties in Monday’s crash.