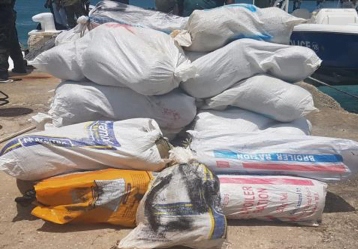 NASSAU, BAHAMAS – Three adult Bahamian males are expected to be formally charged before a magistrate court this week, after they were allegedly found in possession of a large quantity of marijuana on Friday, May 3, 2019.

A search of the vessel uncovered 43 crocus sacks with suspected marijuana.

Three adult Bahamian males were on board the vessel and were taken into custody.