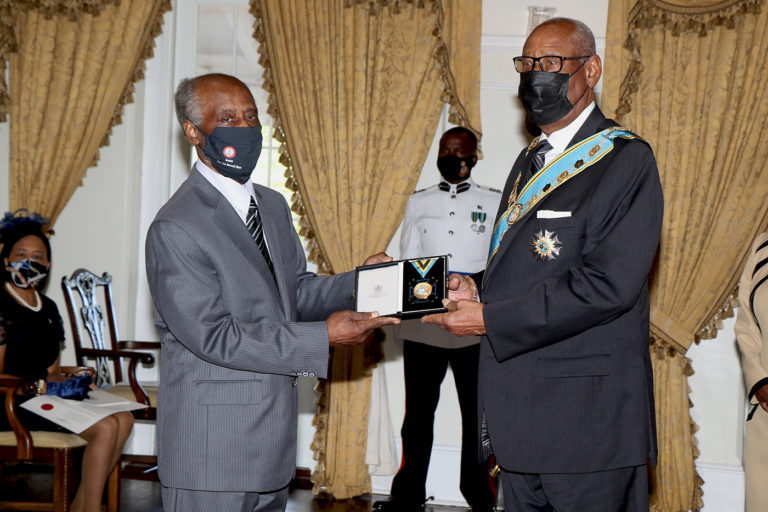 The medals and insignias were presented in three separate ceremonies in the ballroom of Government House, Mount Fitzwilliam, Thursday, November 19. The event was previously scheduled for National Heroes Day in October but was postponed due to the COVID-19 pandemic.

The honorees were as follows:

THE ORDER OF NATIONAL HERO

THE ORDER OF THE BAHAMAS

THE ORDER OF EXCELLENCE

THE ORDER OF DISTINCTION

THE ORDER OF MERIT

According to a government statement, the ceremony was attended by Advisory Committee for National Honours Chairman and MP Mark Humes, Royal Bahamas Defence Force Commodore Raymond King, Police Commissioner Paul Rolle, Secretary to the Governor General Jack Thompson, Deputy Permanent Secretary Sherrilyn Wallace and family and friends of the honorees; and entertainment was provided by the Royal Bahamas Police Force band along with pianist Brandin Johnson and saxophonist Lynden Sands.

Prime Minister Dr Hubert Minnis thanked the honourees “for their service and love of country”.

Minnis said: “The Bahamas is fortunate that Sir Randol, the Hon Paul Adderley, Sir Alvin Braynen and the Hon J Henry Bostwick helped to secure democracy and the rule of law in The Bahamas”.

“Our greatest tribute to them is to follow their example in this and successive generations by safeguarding and upholding democratic values and norms.”