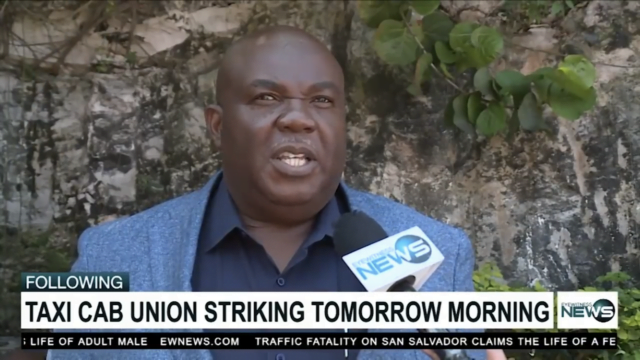 Union president alleges taxi drivers are being victimized at RTD

President of the Bahamas Taxi Cab Union, Wesley Ferguson, told Eyewitness News yesterday that the union has made several attempts to sit down and negotiate with Minister of Transport and Local Government, Renward Wells, but to date, there was no favourable response.

As it now stands, Ferguson said the union has had enough.

The Bahamas Taxi Cab Union has repeatedly voiced several concerns in recent months on a number of matters, mainly the unlawful use of taxi plates and an infringement on their business by rental car owners.  And while these issues persist, Ferguson claimed yesterday that taxi drivers are now allegedly being victimized when seeking to license their cabs at the Road Traffic Department (RTD).

“In essence, the only thing we got from government so far is [having] 200 taxi drivers at the end of this licensing period, come Saturday morning, are going to suddenly be out of business. The [Road Traffic] Controller has gone on an all-out attack against taxi drivers where they are knit picking,” Ferguson alleged.

He further claimed that, “Plates have been screwed off of taxis indiscriminately and, in fact, they have some plates that they say have not been issued properly… or [was issued] illegally and these people are being told [by the Road Traffic Department] we are not licensing your car.”

The taxi cab union president said despite this and the many concerns previously taken to the government, the union has received no response.

“The green plates are still out there.

“These private charter bus plates are still out there running around as taxi cabs.

“You still have the SUV, town cars and delivery cars competing with taxi cabs on a line when the law states that it ought to be a prearranged vehicle.

“We still have the taxi plates and the self-drive cars still the same color,” Ferguson said.

The Taxi Cab Union protest will begin today at 9:00 a.m.