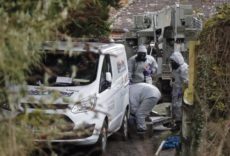 LONDON (AP) — Russia is “highly likely” to blame for poisoning a former spy and his daughter with a military-grade nerve agent, British Prime Minister Theresa May said Monday, demanding that Moscow give a compelling explanation or face “extensive” retaliation. May told lawmakers in a strongly worded statement that without a credible response from Russia […]