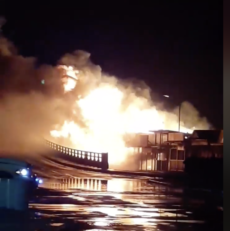 NASSAU, BAHAMAS — As the Ministry of Agriculture and Marine Resources yesterday sought to clarify for the public what it said were misleading claims made regarding the plight of Potter’s Cay Dock vendors impacted by a recent fire, it pledged financial support to help those displaced vendors rebuild their stalls after the all-clear is given […]

NASSAU, BAHAMAS — A major fire at Potter’s Cay burned several stalls on the eastern side and destroyed two vessels last night. According to police, the Fire Department was called to a structural fire shortly before midnight. “At the scene, they met several wooded single-story structures on the eastern side of the dock engulfed in […]

An apparent drowning at Potter’s Cay Dock is said to be under active police investigation this morning. It’s the second such incident at the popular spot for tourists and locals. Police said the man was pulled from waters around 9 o’clock Wednesday morning. Foul play is not suspected at this time, although investigators said they […]