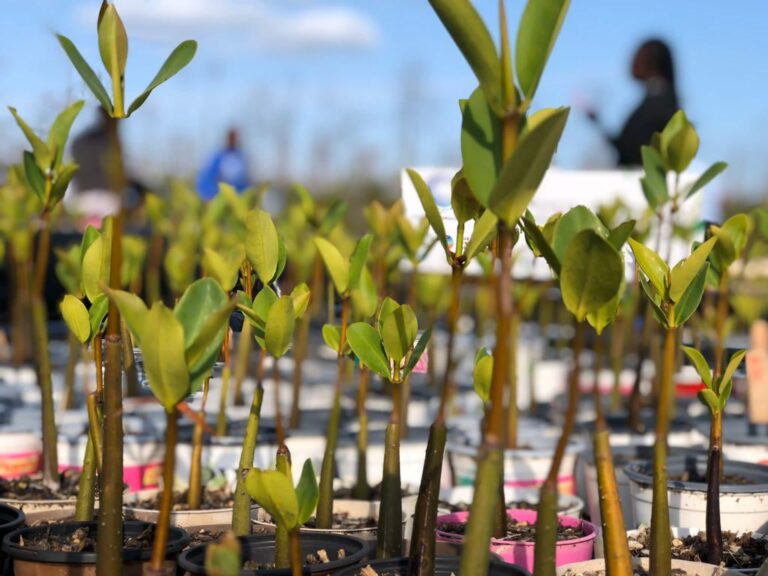 Sprouting mangrove propagules at the nursery in Freeport, Grand Bahama.

The competition reflects WB’s desire for young people to be aware of the state of the environment and involved in restoration efforts, particularly the importance of mangroves.

“I’ve always been fascinated with ecosystems, especially mangroves and their ability to regenerate themselves,” Adams, a student at Teleos Christian School in Nassau, said.

“Even though mangroves help fight climate change, they are not immune to it; so we have to do whatever we can to protect them.”

Following hurricane Dorian, a significant number of mangroves were damaged in Grand Bahama and Abaco. With the memory of the storm still fresh in the minds of many, Waterkeepers Bahamas asked students from throughout The Bahamas to participate in its annual Summer Essay Competition.

Primary, junior high, and senior high students were invited to write about the role mangroves play in protecting our islands from future storms.

The competition, which launched in the last week of June and closed on July 29, sought to raise greater awareness of the ongoing work of Waterkeepers Bahamas and other environmental groups as it relates to mangrove restoration.

In a press release, Waterkeepers Bahamas Executive Director Rashema Ingraham said the group is mindful that students play an important role in the climate change conversation.

She noted mangroves are natural defense systems to storm surge and hurricane winds and are critical to reducing impact.

“The essay competition also gives them the opportunity to be creative, research, and reflect on experiences – highlighting lessons to be learned” Ingraham added.

Anwar Rolle, a sixth grader from Sadie Curtis Primary in Nassau, is the first-place winner in the primary category. The junior high winner is Jalanna Pinder, a 9th grader at Grand Bahama Academy. The students received cash and school supplies.

Waterkeepers Bahamas has partnered with Earthcare Bahamas, Save The Bays, Coral Vita, and Blue Action Lab to harvest, monitor and plant 30,000 mangroves from within its nursery and backyard nurseries from mangrove mania teams by the end of the year, at the close of the hurricane season.