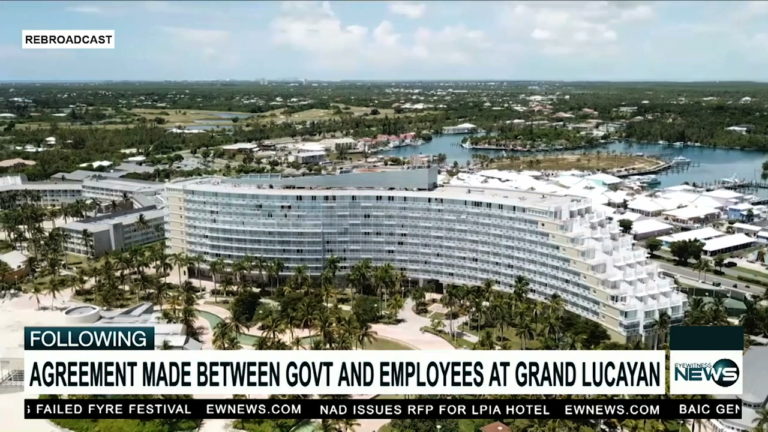 NASSAU, BAHAMAS –  Despite ongoing negotiations, as of yesterday, there was still no forward movement on the payout of Voluntary Separation packages (VSEPs) for a  total of 90 managerial workers at the Our Lucaya Resort in Grand Bahama.

“We do not have a settlement with the management union at this point and we hope to have that soon,” assured Minister of Labour Dion Foulkes before heading Tuesday’s Cabinet meeting.

“We do not have a timeframe, but as soon as possible.

“The workers at the hotel have been waiting for quite some time.

The Grand Lucayan VSEP offer was part of an overall strategy to streamline the operational costs of the resort and put it on a path to profitability before its resale, which the government hoped to achieve in the second quarter of this year.

The government said the VSEPs would have been completed before Christmas, but to date, negotiations continue.

Last week, president of The Bahamas Hotel Managerial Association Obie Ferguson – who is in negotiations with the board of Lucayan Renewal Holdings over VSEPs for managers – told the media that the total expected to be paid out to managers is a little over five million dollars.

He stated, however, that Lucayan Renewal Holdings Chairman, Michael Scott, who is also charged with heading the government’s special purpose vehicle (SPV), originally told his clients to take 2.7million, and it was only after further discussion that Scott agreed to increase the payout to 3.1 million.

But Ferguson still has an issue that VSEPs are not based on the total years of service for some managers.

The government’s special purpose vehicle (SPV) capped the VSEP offer at 12 years per employee, despite many of them working for the resort for more than two decades.

Ferguson believes that this is not only is this unfair, but it is not in line with the tenets of VSEP offers.

The union chief explained that if a person works for a company of 21 years, then an assessment of that person’s voluntary separation package should be based on 21 years.

Ferguson said the union expects the value of the offer to managers and supervisors to near $4.2 million, and also noted that employees are entitled to an annuity payment stemming from a 2007 program.

Meanwhile, the labour minister expressed on Tuesday that his main concern is ensuring that “the right formula” is determined to ensure that every worker gets what he or she deserves; and to also ensure that the union, management and the board are all content with the settlement.

As for VSEPs for line staff at the Grand Lucayan Resort, Foulkes said for the past week, the union has been in consultation with management at the hotel and there is an agreement in principle with the line staff union and union executives.

“We have a global figure that we have agreed with them. We are trying to work the specific payout for all 160 persons, just to make sure that it is accurate,” Foulkes said.

“Some of the monies owed to some of the employees at the hotel go back for several years, so we want to ensure that that is accurate.”