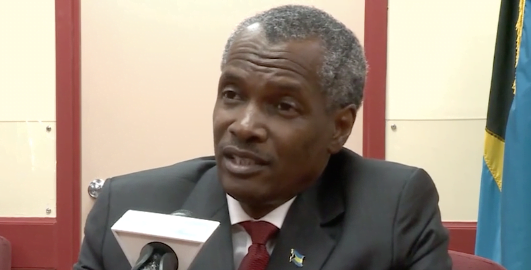 Abaco shantytown demolitions will continue despite scolding from UN

NASSAU, BAHAMAS — Deputy Prime Minister and Public Works Minister Desmond Bannister suggested yesterday that the government will move forward with the demolition of shantytowns on Abaco, insisting that he has a job to do in eradicating illegal dwellings.

Bannister was responding to an appeal from United Nations human rights experts to halt planned demolitions of approximately 600 homes in unregulated settlements on the island.

He insisted that the government will do what is in the best interest of the Bahamian people, adding that there could be consequences of him not doing his job.

“The consequences of me not doing my job is we can have a spread of E. coli in Abaco,” he told reporters outside Cabinet.

“The water in Abaco could be contaminated and people could be sick.

“We could have a constant widespread anomie in this country where people decide that they can go in other people’s land and take it over.”

The public works minister advised that he received a number of complaints from Bahamians on New Providence, who claim there are “shanty houses” being built on their private properties.

Bannister said the government intends to conduct an exercise in the capital to deal with the matter “very soon”.

“And if any of you have been to Haiti, you will see what happens there — dirt, garbage, shanty houses all over the place.

Hurricane Dorian destroyed the two largest of the six shantytowns on Abaco — The Mudd and Pigeon Peas — in September 2019.

Following the storm, the government issued an order with immediate effect preventing anyone from building or developing in The Mudd, Pigeon Peas, Sandbanks and The Farm and cleared down the debris from those storm-ridden areas.

The government was expected to tear down the remaining structures in the Farm on Monday, after issuing eviction notices, however, there was no movement on demolition.

The deputy prime minister and public works minister said yesterday that he is just carrying out his job.

“If those folks want to make a statement about The Bahamas, then I think as a country, as we are deporting people, if they want them to come to their neighborhood and put a shantytown in their neighborhood…” Bannister added.

On Friday, UN experts cited health and humanitarian concerns that “the community of largely Haitian descendants and migrants numbering up to 2,000 people, including many women and children, are at serious risk of becoming homeless as a result of the clearance expected to take place”.

“The UN human rights experts urged the government of The Bahamas, which currently holds the vice presidency at the Human Rights Council, to ensure that its internal policies are implemented in full compliance with international human rights standards,” the statement said.

Responding to emailed questions from Eyewitness News, UN Special Rapporteur on the Right to Housing Balakrishnan Rajagopal advised that there are currently no ongoing talks with the government and the organization regarding the matter.

“I remain open to dialogue and discussion to resolve this matter in ways that fully comply with the international legal obligations assumed by The Bahamas”, Rajagopal said.

Asked whether the UN is considering providing housing or some level of assistance to those migrants, should the Bahamian government decide to go through with its demolition plans, Rajagopal noted that that is the obligation of The Bahamas.

“The primary obligation to ensure housing and other assistance to the migrant population of Haitians, as well as others who are at risk of losing their right to housing in The Bahamas, remains that of the government of Bahamas,” he said.

“However, the international community, including by acting through the UN, can provide assistance in this regard if necessary”.