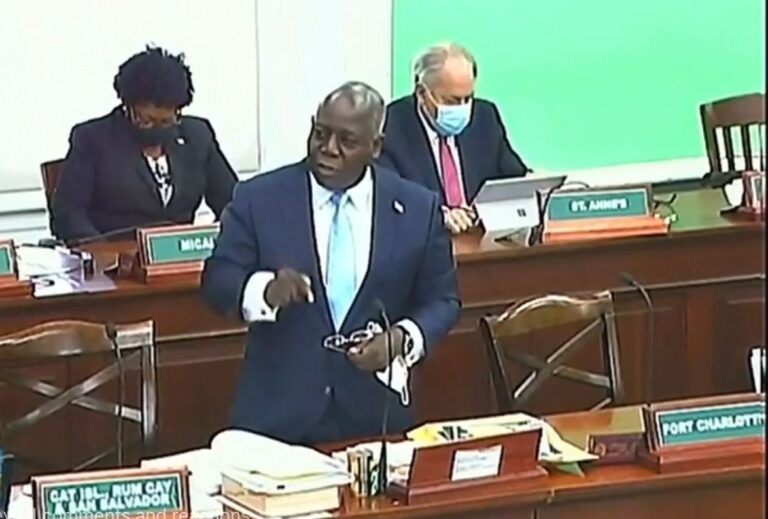 Davis: The continual disingenuous spinning by the members opposite is infuriating

Davis was embroiled in a back-and-forth with Deputy Prime Minister and Minister of Public Works Desmond Bannister, the Carmichael MP, over a Christie administration planned development on Wulff Road.

As he addressed the plans of the government during his contribution to the 2021/2022 budget debate, Bannister took a shot at the Progressive Liberal Party’s (PLP) record and pointed to a $30 million investment by the former government for Star Academy — a facility for at-risk youth.

Bannister noted that the then government, under which Davis served as deputy prime minister and minister of works and urban development, invested money without owning the land or having a lease.

The land off Wulff Road is owned by the Seventh-day Adventist Church and is the former site of Bahamas Academy.

But Davis stood to his feet and called the suggestion “near criminal”.

The opposition leader refuted the claim and insisted that the government had an agreement with the church for the project and was not building without an understanding of the owners of the property.

He said it was a public-private partnership initiative with the Seventh-day Adventist Church.

Bannister, however, further goaded Davis, noting that he as a queen’s counsel should know one cannot build on land without a lease from the owner.

The works minister demanded that members opposite produce the necessary files.

From where he was standing, Davis responded with an expletive that sent the Parliament in a frenzy.

He noted during a point of order: “The continual disingenuous spinning by the members opposite is infuriating. The files are with them.”

Moultrie took several moments to calm down the excited group of parliamentarians and expunged the word from the House record.

After several more outbursts from members, hitting on the tables and shouting across the floor, Moultrie warned: “From this point forward, anyone who shouts persistently across this floor when the speaker asks them to desist from doing so will be asked to withdraw from this Parliament. I’m not tolerating that any further… You’ve gone over the edge now.”