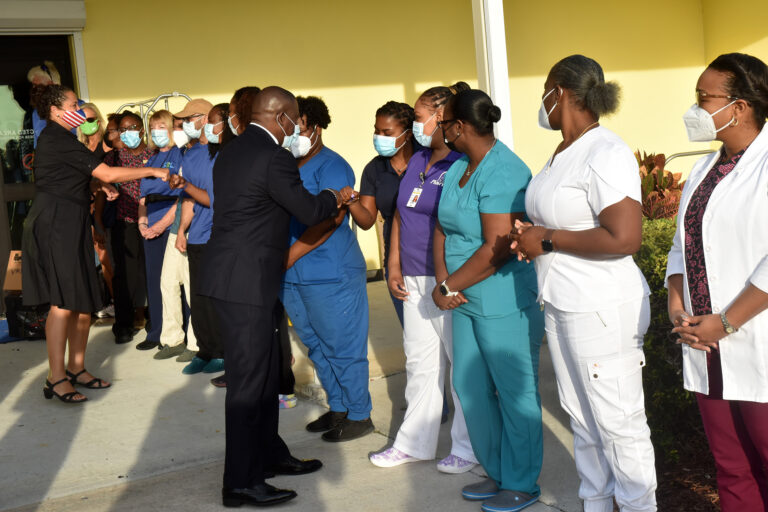 United States Embassy in Nassau Charge d’Affaires Usha Pitts (far left) and Minister of Health Renward Wells (center) greet healthcare workers at Odyssey Aviation on Monday, June 21, 2021 ahead of their departure to Family Islands as the US government assisted the Ministry of Health with transporting a second tranche of COVID-19 vaccines. (BIS PHOTO/PATRICK HANNA)

NASSAU, BAHAMAS — Health Minister Renward Wells stressed yesterday that a long-promised honorarium was “not for every healthcare worker”, noting the government had allocated some $3 million for that payout.

Wells told reporters yesterday: “The honorarium was not for every healthcare worker. It was a gift from the government initially for those who worked directly on the frontlines in regards to COVID.

“The individuals chosen were done so by those who were the supervisors in the requite sectors of the healthcare sector, who would have put forth their members and would have said these are the persons on the frontline in regards to COVID-19.

“The government would have then issued the requisite compensation to these individuals.”

Wells added: “The head of sections, along with a committee inside the Ministry of Health, determined what each individual was entitled to. This was an incentive to try and incentivize the healthcare sector to come forward.

“I understand the smallest amount some persons would have received would have been $1,000, but the government allocated some $3 million to that effort and all those who were designated by the care sector to be so entitled were given what was due them.”

During the 2021/2022 budget debate in June of this year, Wells had advised the general public that approval was given for the payout of $1,040,600 in honorarium and death benefits to a limited number of frontline nurses, physicians and medical service workers involved in the COVID-19 response for the period March 19 to June 19, 2020.

The minister of health, in his budget presentation, also advised that the government approved an additional $3 million in honorarium payments to compensate other healthcare workers “who later joined in the fight”.

This minister is talking fool every nurse was on the front line we had no testing or a proper roll out therefore we had no idea where Covid was entering any institution. Everyone served now you want to pinch pennies when the world looking for nurses. It is poor management like this why our nurses are leaving. I am a nurse at Sandilands never in a million years I thought Covid would have entered Sandilands but it did. I contracted it from work in October 2020 it almost kill me the recovery was extremely difficult so I can talk from experience. We are in a crisis and should the government fail to do right by the nurses you really expect the nurses to be there much longer to fight COVID much longer? We have family also we have inadequate health care no family coverage when we are exposed we are denied testing after exposure place not clean properly nothing. Please use your head for once pay those who taking the real risk HEALTH CARE WORKERS. REMEMBER THE HEALTH OF THE NATION IS THE WEALTH OF THE NATION. There has not been A SINGLE government in The Bahamas that has ever valued the contributions made by nurse except lip service. Nurses know their value if Covid teach all government how fragile your health care system is you better open your eyes. Mr. Wells let me say YOU sir are a disgrace the worst yet no Minister of health even visit Sandilands we are not considered essential. Despite the many challenges you never ondemanded testing up ther if only to protect the elderly you really do not care but with minimal understanding about health I expect no better. I am so disgusted by you and your talk you need to step down as I want you to know it is the lax attitude that you taking that will be the downfall of this government. Nurses have died I do not know what the hell wave you guys be talking about but for every Healthcare worker the past 16 months have been one long never ending day. We do not know about no wave we work snd work and work. While other ministries was close we worked so get it right pay the nurses fairly Nurses Doctors Patient Care Technician all died have respect for that enough of your fast talking question ducking fake smiling ways man simply do better as this is no time for HEALTH CARE WORKERS TO BE FED UP