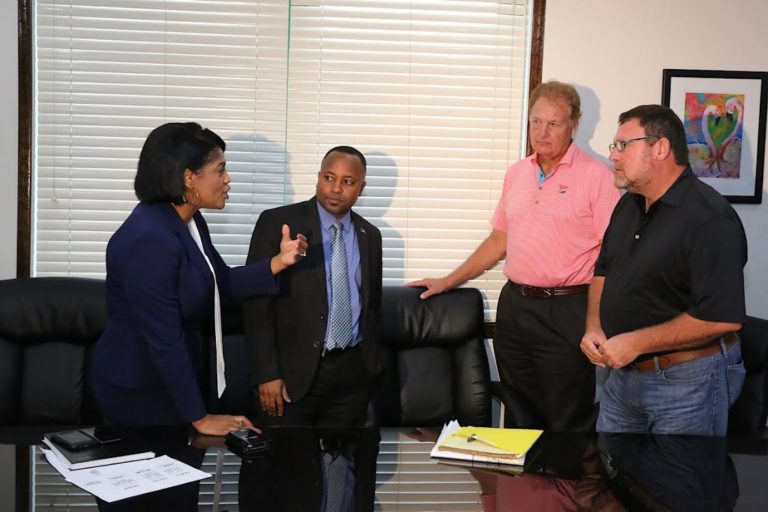 TALKING BUSINESS – Minister of State for Grand Bahama, Senator Kwasi Thompson (centre), along with Parliamentary Secretary in the Office of The Prime Minister and Member of Parliament for West End & Bimini, Pakesia Parker-Edgecombe (left) chat with Developers of Seaward Fishing Village, Philip Ward (second right) and Mike Hayhurst following a press conference in the Office of the Prime Minister, January 16, 2018 to announce plans to relaunch the project, which was started in 2003, but had to be put on hold due to global recession. The project, once completed, will attract yachting enthusiasts and sport fishermen from Florida to West Grand Bahama.  (BIS Photo/Lisa Davis)

FREEPORT, Grand Bahama – Investor confidence is returns to Grand Bahama: in a press conference at the Office of The Prime Minister on Tuesday, Minister of State for Grand Bahama, the Hon. Kwasi Thompson hosted investors Philip Ward and Mike Hayhurst, developers of a series of village-styled homes on marina-front lots in Deadman’s Reef that will be known as ‘Seaward Fishing Village.’

“We’re pleased to announce that they have already set out to engage local Bahamian contractors and purchase many of the materials locally,” said Minister Thompson.

“We anticipate that this will create a unique community for year-round visitors to Grand Bahama; visitors looking for a getaway with the capacity to dock their boats and enjoy sport-fishing.”

Minister Thompson noted that Grand Bahama is an ideal location for persons considering second home ownership. He said the island possesses tranquility, which gives the relaxed feeling of being far from any metropolis — but is yet only 57 miles away from the US, so almost anything one would need would be accessible.

“As Minister of State for Grand Bahama, I am particularly excited that this village will be housed in Deadman’s Reef,” added Minister Thompson. “I am pleased to see on-going development in the Eastern and Western ends of the island, outside of Freeport.

Seaward Fishing Village is not a new project. It was first started in 2003, but due to the recent global recession it had to be put on hold. The project is set to be relaunched in the very near future, and boost activity in West Grand Bahama.

“The West is a true gem and I am happy that international partners see its value and promise and choose to invest here in our island.”

Parliamentary Secretary in the Office of the Prime Minister with responsibility for Information and Communications, and Member of Parliament for West End and Bimini, Pakesia Parker-Edgecombe welcomed Mr. Ward and Mr. Hayhurst back to Grand Bahama, specifically, back to West Grand Bahama.

“We are happy that they decided to stick with Grand Bahama, particularly West Grand Bahama,” said Mrs. Edgecombe. “That speaks to investor confidence in our community.

“We are certain that what we have to offer in Deadman’s Reef and in the West will be ideal for those persons who will purchase homes in this new development. Without a doubt, this project will boost the boating and yachting traffic to Grand Bahama and so this project is being re-started at the right time.”

Philip Ward admitted that the project has been a difficult one for the developers, having had to begin the groundwork and then put the project on hold. However, he noted that because Grand Bahama has so much to offer, it made economic sense to complete the project.

“What I always liked about Deadman’s Reef was that I always felt I was in one of the Family Islands, which meant being out in nature, and the ocean, and being surrounded by friendly people,” said Mr. Ward.

“On the other hand, when my wife comes here, she likes to go to Port Lucaya.  So, that tells you that there is so much to offer here, and it has great variety.”

He noted that although West Grand Bahama offers the “back-to-nature” feel, it is also equipped with the modern amenities that many visitors from the United States are accustomed to, like infrastructure, modern technology, well-equipped hospital and clinics, food stores and great restaurants. This, he said, is a major selling point for this project and for Grand Bahama on the whole.

Seaward has a very large marina.  There are underground electrical and water utilities on the project.

With all of that work already in place, the next step now is to begin the actual construction of the village-styled homes, which will be done by local contractors.

Ward says that things are picking up economically in the United States and he expects to see that positive impact have an effect on Grand Bahama in short order, because of its proximity to the United States.

“It wasn’t until this last year that you felt the economy changing in the United States,” said Ward. “There is optimism now that I haven’t seen in a long time. The construction in Florida, in particular, is at an all-time high.

“It takes a little while for the momentum and the optimism in the United States to reach The Bahamas, but it is going to happen. It’s happening right now. You will see more and more Americans come over here and spend money and enjoy what you have to offer.”