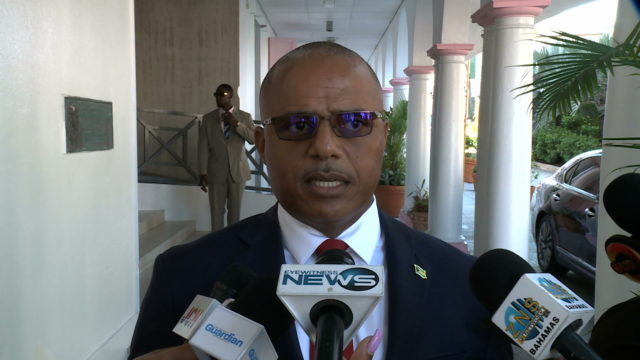 Minister of National Security Marvin Dames said yesterday that the Federal Bureau of Investigation (FBI) is now working in consultation with the Royal Bahamas Police Force to determine whether any laws may have been broken with respect to an alleged visa scam in The Bahamas.

Responding to an affidavit filed in Washington, D.C., by FBI Special Agent Kevin Gounaud, who detailed the FBI’s two-year probe, Dames said, “We have had some initial discussions with the U.S.

“The FBI is now working in consultation with the Royal Bahamas Police Force, [which] will receive a further briefing on the information they may have at their disposal and we will determine from that information whether any laws in The Bahamas have been broken.”

Dames made clear that authorities have “no information, none whatsoever” to implicate anyone mentioned in the document to date, but if evidence is found implicating anyone in The Bahamas, however, authorities will follow the law.

In his affidavit, Gounaud outlines conversations between undercover FBI informants and Edward Israel Saintil, a foreign national living in The Bahamas who the FBI identified as the alleged lead conspirator in the matter.

According to Gounaud, Saintil claimed in those conversations that he could help obtain work permits and facilitate illegal entry into the United States.

The special agent also alleged in the document that Saintil claimed he had relationships with top immigration officials, including former Director of Immigration William Pratt.

Pratt has refuted the allegations, denying having ever met Saintil or having any dealings with him or “any other person in an illegal, unlawful conduct of any kind”.

The FBI investigation began in October 2016.

In a separate interview, Attorney General Carl Bethel said while the matter will be dealt with through the appropriate channels, the allegations contained in the affidavit were unverified.

Bethel said when he received a copy of the sworn affidavit he was in Paris at the time and immediately instructed his officials to forward it onto the RBPF’s Anti-Corruption Unit.

“It is a matter that the police have been asked to investigate,” Bethel said.

“Let’s bear in mind that what we have at present are unverified allegations made against public servants in the Commonwealth of The Bahamas in foreign proceedings, and we owe it; both to the administration of justice and to these persons, to have this matter reviewed.

He continued, “If there is nothing that can be substantiated [and] that would be known. If there is some other problem, well that will also be dealt with. So, that is where we are and I just want to assure the Bahamian people that so far as the due administration of law is concerned, we’re doing exactly what we need to do to properly ensure that we have good governance in The Bahamas.”

According to the affidavit, Saintil came to the attention of U.S. law enforcement after Edna St. Fleur attempted to gain illegal entry into the U.S. with documents allegedly provided to her by Saintil.