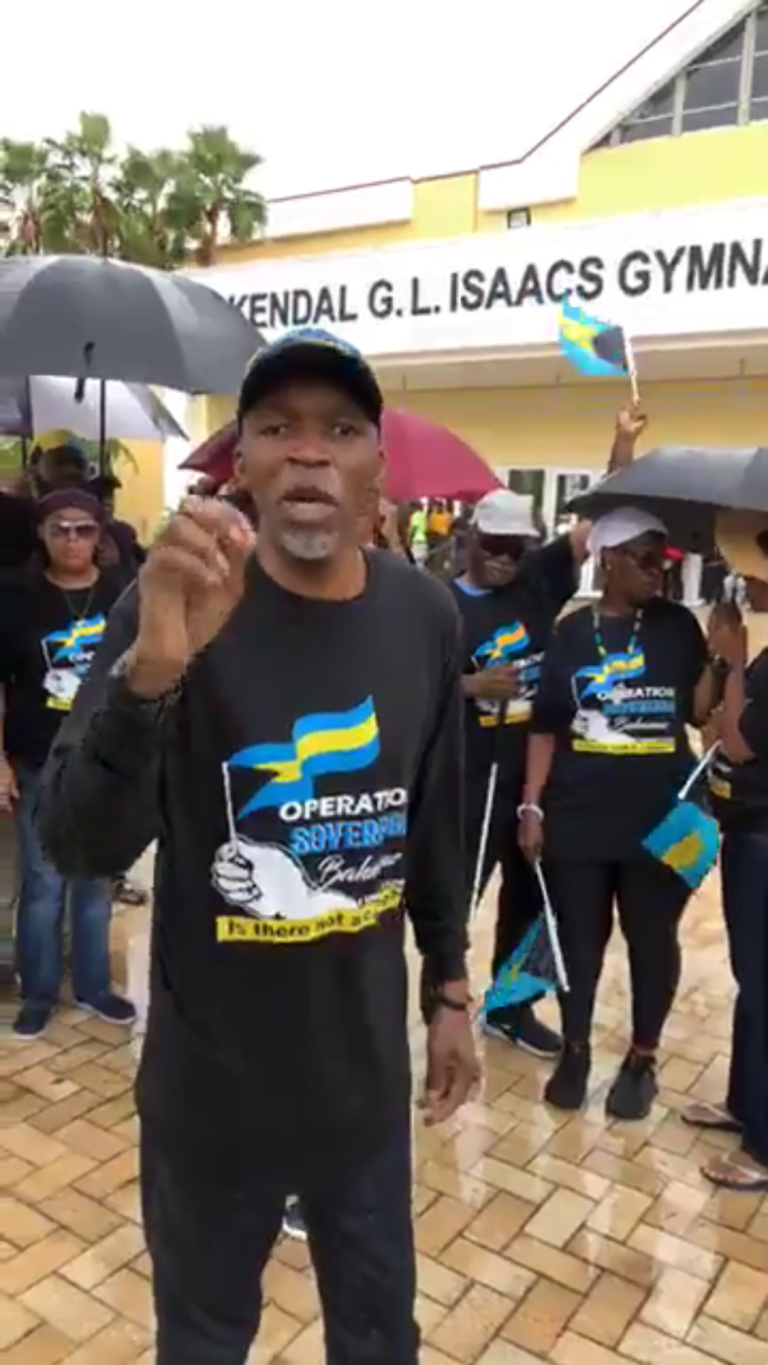 NASSAU, BAHAMAS – A fringe nationalist group staged a protest outside of the Kendal G. L. Issacs Gymnasium on Saturday, calling on the government to evict hundreds of Hurricane Dorian victims living at the shelter.

Several members of the group Operation Sovereign Bahamas demonstrated in the rain, holding Bahamian flags and jeering at evacuees as they entered the shelter.

In a Facebook Live video, some members could be heard shouting “go home”.

“We are here to let everybody know that it’s unfair for the Haitians to be kept in the Kendal G. L. Issacs Gym for any longer of a time.

“The gym was not designed for any long shelter period. And so we are asking the government to make a decision in getting these person getting out of the gym.

“It’s not fair to the young Haitians and the Haitians who are inside the gym, it’s not designed for that.

“…This is not disregarding the humanitarian efforts that are taking place behind us. The gym is not a hotel. It’s not built for sex drives.

“For some reason, the government entered this process without an exit plan. They allowed all these people out of Abaco without having a plan on what they’re going to do with them.”

Francis pointed to a recent video taken from inside the gymnasium showing hundreds of people cramped on cots and mattresses.

“We want to help them today. There are all kind of flights leaving to go to Haiti,” he said.

Other members of the group shouted, “repatriation” and “we want you out of our country”.

“The persons who inside this gym, they need to know and understand that it’s time for us to get our gym back,” Francis added.

Dorian pounded the islands of Abaco and Grand Bahama between September 1-3, claiming the lives of a confirmed 67 people — and displacing thousands, many of whom resided in Haitian shantytown communities in Abaco.

The Category 5 storm destroyed the two largest of the six shantytowns on the island – The Mudd and the Peas.

Following the storm, the government issued a cease order with immediate effect for The Mudd, The Peas, Sandbanks and The Farm in order to prevent anyone from building or developing in those communities.

The group yesterday also took issue with vehicles parked outside of the stadium selling food to shelterees.

They maintained that the demonstration was not fueled by hate and demanded that the government provide a plan to get the storm evacuees out of the gym.

Asked about the matter yesterday, Immigration Minister Elsworth Johnson told Eyewitness News Online the group has every right to exercise their right to Freedom of Expression.

“If there is anything I can say in terms of the immigration department, what we do, we have to be dispassionate,” Johnson said.

“We do that without fear, favor or ill-will. If somebody wants to exercise their rights to Freedom of Expression, that’s their business. We have absolutely nothing to do with that. And so I guess if they had breached some laws, it’s for someone else to deal with that.

“All I would say is, we are focused, we are dispassionate, we understand what the law requires, we understand what our international obligations are, those obligations whether it be the Universal Declarations of Human Rights, UN Declaration of the Rights of The Child, and we will enforce them without fear favor or ill will, not having regard of origin, race, sex, whatever.”

The protest come on the heels of defense force officers intercepting a Haitian vessel with 58 Haitians onboard in the Exuma Cays shortly after 5 p.m. on Friday.

It remains unclear how many undocumented individuals are being housed in the shelters.