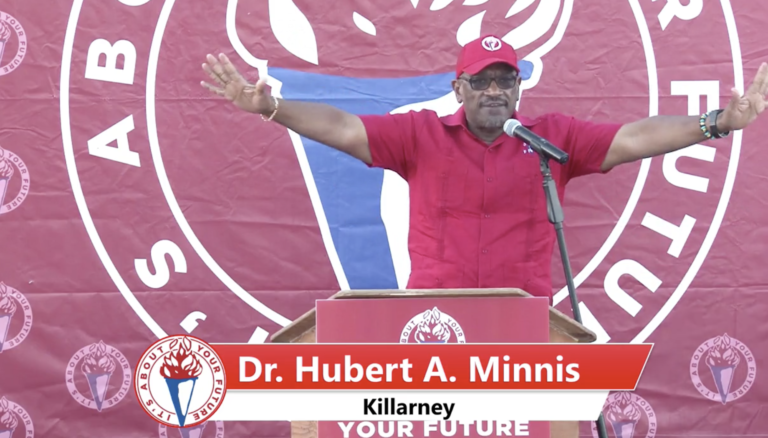 NASSAU, BAHAMAS — Prime Minister Dr Hubert Minnis claimed yesterday that he has been “reliably informed” of his party’s victory at the advance polls.

Minnis was speaking at the Free National Movement’s (FNM) drive-in rally ion Cat Island, and also made the claim later that day at another rally on San Salvador.

Thursday’s advance polls became chaotic at some stations, where procedural challenges like bottlenecking collided with poor adherence to COVID-19 social distancing protocols and inadequate provisions to accommodate the elderly and disabled.

There were also concerns raised about the sealing of ballot boxes at some polling stations.

Acting Parliamentary Commissioner Lavado Duncanson told Eyewitness News that the post-mortem on how the day went is still ongoing, with plans to make much-needed improvements.

In a letter, Deputy National Coordinator of the Progressive Liberal Party (PLP) Valentine Grimes contended that “unintentional but serious errors” took place that could threaten the integrity of the September 16 vote if not corrected.

On San Salvador, Minnis further claimed that the PLP has been paying between $50 to $100 for people to wear “yellow shirts”, including his own party’s supporters.

Minnis said: “They went as far as offering some of my own generals whom they thought were vocal $400 to $500 to wear T-shirts and become vocal against me, figuring that that would give them some milage. But, of course, their $400 was taken and nothing else happened. You know why? The Bahamas is staying red.”

He told Cat Islanders that his administration is “investing millions in waterworks”, adding he didn’t understand how Davis failed to provide potable water for decades.

“Brave is all over promising you what he says he would do for you,” Minnis said. “He likes to show pretty pictures of his plans; they are only pictures and things in his imagination. They certainly are not real plans and the FNM is actually doing for you.”

Minnis also committed his administration to reopen the Arthur’s Town airport. He said the request for proposals process to develop Family Island airports will also include an invitation for bidders to express an interest in the total rebuild of the shuttered facility.

In 2019, Tourism and Aviation Minister Dionisio D’Aguilar told the media there was no way to justify spending money on the refurbishment of the Arthur’s Town Airport.

Any report on the water situation in Central Eleuthera???