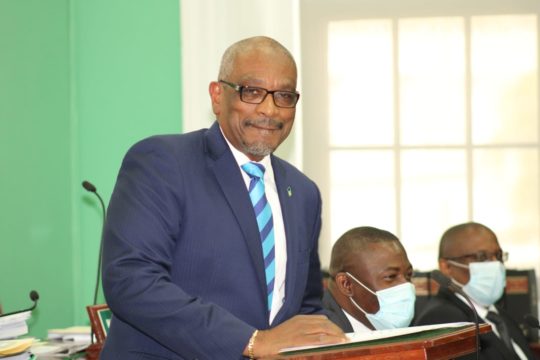 NASSAU, BAHAMAS — Prime Minister Dr Hubert Minnis said yesterday he has to be advised by his team before he decides to “ring the bell” for the upcoming general election.

As he jested with MPs across the House floor during his presentation of the mid-year budget, Minnis joked about the growing speculation that he intends to call an early election.

He was responding to St Anne’s MP Brent Symonette, who said to him: “Ring the bell.”

Minnis said: “You think everybody ready? If you think they ready, I’d stand here now and ring the bell.”

With a chuckle, he added: “I have to be advised by my team, though. This is not a government in isolation.

Minnis also took a shot at Pineridge MP Fredrick McAlpine, seemingly in jest, insisting that if McAlpine also wants him to “ring the bell”, the Pineridge MP would be “gone”.

Both major political parties have already begun efforts to jumpstart their election campaigning.

The Progressive Liberal Party (PLP) has already named 18 candidates vying for office, while the Free National Movement (FNM) has ratified 25 candidates, with some incumbents not receiving nominations.

The prime minister has yet to call a date for the election, which only he holds the power to do, though both PLP and FNM insiders believe it will be called before the next budget debate.

Speaker of the House of Assembly Halson Moultrie has predicted Minnis will call a general election in June of this year or shortly thereafter.

While appearing as a guest on radio talk show “The Hit Back” with host Nahaja Black, Moultrie opined that the government cannot go beyond the mid-year budget exercise without finding alternative means to raise revenue in the form of more taxes, which would adversely affect its chances of re-election.

He said based on his circumstances, his experiences and analytical expertise, he “reached a conclusion that the election must be called very soon”.

Dr Chris Curry, associate professor of history at the University of The Bahamas, expressed a similar belief, telling Eyewitness News recently: “I think there will be an early election. I think it’s going to be either May or June.”

An early “Election Call” by the P.M. at this point would be not be in the FNMs best interest. Simply, they would lose. Why: The BAHAMIAN Electorate are simply frustrated, fed up, out of work and tired, we see no vision and rainbow on the horizon. My advice to P.M. Minnis, wait, do your full term, let your ongoing works and promises come to fruition. We are Listening, Watching & Waiting. Just My 2 Cents. For What It Is Worth.????

This is so distasteful when have children reàfing such why do publish rubhish .You as just abd as them who say such tuing shame on you

Both Parties don’t belong in Gov…sick of this BS. If ppl decide to vote either, they’re going to continue ruining this small independent country. If the government were honest during early elections years ago, then maybe crime would have been down. People would have hope that they do belong and have opportunities to strive here. If you’re only going to crook on each election, then you can expect a failing state of hopelessness.

Ring the bell minnis so that you will lose. Tired of the BS!!!