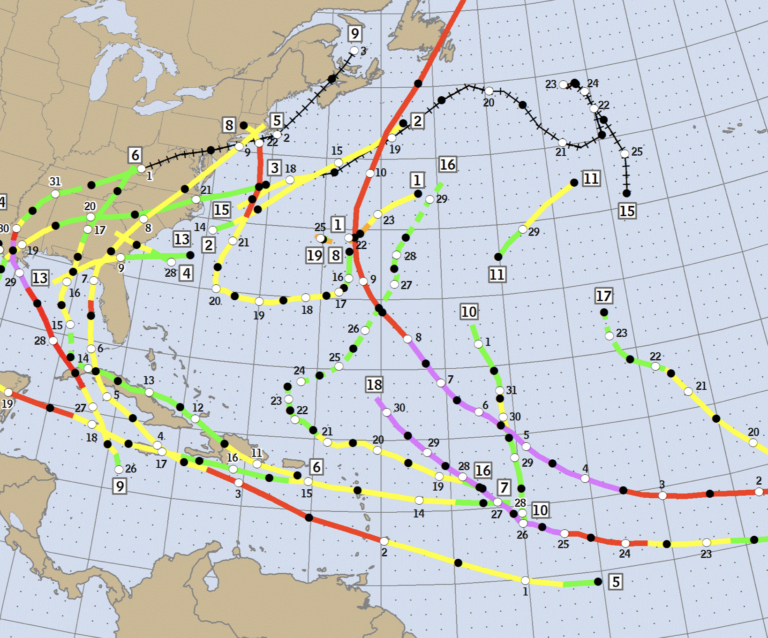 A chart showing all 20 named storms of the 2021 Atlantic Hurricane Season. (NHC)

“We’re not done with the season yet; that doesn’t mean we’re home safe”

NASSAU, BAHAMAS — While more than a month remains in the 2021 Atlantic Hurricane Season, Bahamians may be able to breathe a little easier as meteorologists confirmed that the peak of the season has passed.

The season comes to a close on November 30.

Typically, the peak of the Atlantic season runs from late August to mid-October, during months where there are warmer waters and less wind shear.

Department of Meteorology Senior Deputy Director Jeffrey Simmons told Eyewitness News: “It is safe to say we got through the peak of the season safely.

“That’s the reason why we give that peak from late August to early October, or maybe even as soon as late September; that’s when all the major hurricanes we’ll see [occur] in that time period.

“Now, we do [see] some outside of that time period, but most of them that happened — when you do a graph of it — [were] between late August and early October.

“Most of the storms you would have seen recently, especially storms like Matthew, Joaquin and Dorian, all of them would have happened during the peak of the season.

“The last major storm that I could recall affecting us outside of the peak season was not since 2001, Michelle, and that was around November.”

Simmons made clear that despite being past the peak, storms and major hurricanes occurring now are not impossible.

“We’re not done with the season yet,” he said, adding that residents should remain prepared.

Historically, major hurricanes have not been observed in late October and November, though there have been some exceptions.

Hurricane Matthew impacted the northern Bahamas as a Category 4 storm on October 5, 2016.

Hurricane Michelle, which impacted Cuba, Florida and The Bahamas, struck from October 29 through November 6, 2001.

In 1994, Hurricane Gordon impacted The Bahamas and Cuba as a tropical storm around November 13 before becoming a hurricane on November 17.

In 1985, Hurricane Kate caused minor impact to The Bahamas from November 15-23.

There have been 20 named storms for the season thus far, four of which have been major hurricanes.

Ida and Sam had maximum sustained winds of 130 miles per hour.

Of the 20 named storms, 15 occurred between August 11 and September 29, compared to the five that took place between May 22 and July 9.

Meteorologists reminded members of the public not to drop their guard as they continue to monitor the tropics for activity up until the close of the season on November 30.