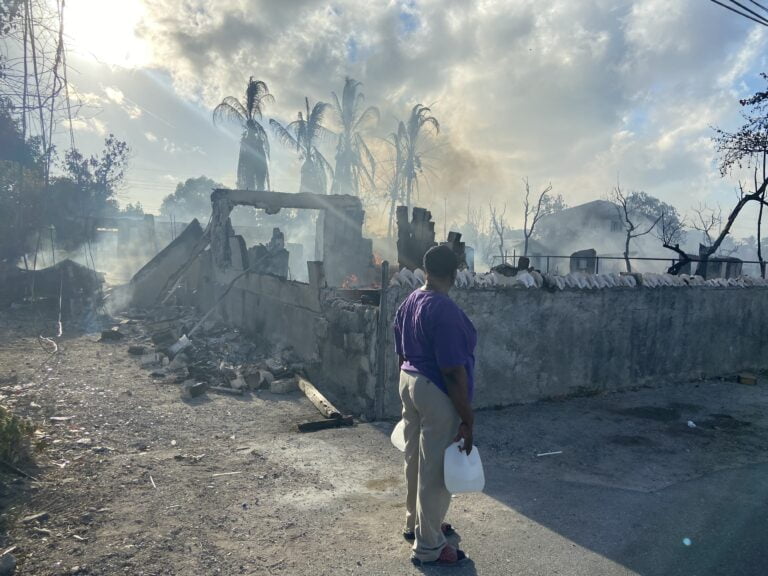 A resident of Jennie Street of nearly 16 years looks in shock at what remains of her home after a fire blazed through the neighborhood on Sunday, May 2, 2021. (FILE PHOTO)

“If we expect in every incident that the government will make us whole, that is not realistic”

NASSAU, BAHAMAS — Minister of Social Services Frankie Campbell yesterday assured that the families recently impacted by Sunday’s fire on Jennie Street are being assisted by his ministry.

Speaking to reporters outside Cabinet about the devastation, Campbell said the Department of Social Services responded immediately, aiding a number of people impacted with temporary housing the following day.

He said Urban Renewal and social services conducted a walkabout of the Jennie Street scene and at least 13 people thus far have been assisted.

He urged those residents impacted by the blaze to go to the fire department and indicate everything that they lost so a fire report could be expedited.

As for any long-term assistance for the displaced families, Campbell noted that the government will do what it can in terms of emergency response.

“The government doesn’t own the structures,” he said.

Police also reported a fire that occurred on Seventh Terrace and Fritz Lane around 3am yesterday, which impacted three families and destroyed four businesses and a church.

A burnt and unrecognizable body was found in the ashes of that blaze.

Additionally, a major fire at Potter’s Cay Dock burned several stalls on the eastern side and destroyed two vessels on April 11.

Campbell did not specify whether his ministry was also assisting the victims of those fires, but suggested that homeowners should consider insurance.

“If we expect in every incident that the government will make us whole, that is not realistic,” he said.

The social services minister could not indicate a timeline for when families will receive certain levels of assistance but noted that he has given instructions for matters such as this to be handled with urgency.

“There is a process. We are trying to eliminate as much of the bureaucracy as much as possible,” Campbell said.

“There are some persons who feel like they need not answer questions when they need assistance. At the end of the day, we in the department need to give an account for the funds that we have and so there must be some paper trail.”

Officials have yet to indicate the cause of the fires on Jennie Street or Fritz Lane and investigations are ongoing.